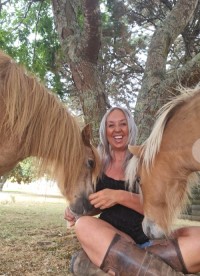 So I ran into a little issue today...

A button fell off my duvet when it went through the washing machine.

No problem! I hear you say, Just sew the bloody thing back on.

And that my friend, is the issue.

The first one is I am, and have always been, very anti-traditional women's roles in the World.

I have always believed that I can achieve anything and more importantly, I was not put on this Earth to run round picking up after a man's ass.

You can also put in the same basket cooking for, baking and housework.

In fact, and I am super aware this is totally naughty, any man I date doesn't know I am a fantastic baker.

Well, to be fair, what's the point of getting him all excited like that I'll be baking for him, when I won't.

I bake for me when I feel like it, and not one minute either side of that.

Judge me if you will.

The second issue worked out that when I eventually found a needle and thread (a kind reminder of an ex), the bloody thing refused to thread.

So I got in my car and went down to buy a new duvet.

Two, (2) places later and apparently you can find any colour, style and/or texture you desire, apart from plain black.

Which is what I wanted.

So as I'm writing this, original duvet is back on my bed, minus one button.

But it begs the question:

Who sews the damn button on?