Actually, that's not 100% true.  I had my first one about 5 years ago.  But this is my first actual Cupping.  But I really went for Acupunture.

Well, actually, first I had a Scraping, then I had a Cupping, and then I had Acupuncture.

Wait, wait, wait...I'm getting way ahead of myself here, let me start at the beginning, because this started a few days ago.

So, there I was last week, doing my thing, and the next minute Spirit are saying, You need to go to Rotorua to your Spiritual Pools.

Well, I don't know how your week was going last week, but mine was batshite crazy.

Every minute was planned.

So I said to Spirit, Hey, that sounds really great, but there is NO chance.  I'm too busy. Maybe I'll go to my normal Spiritual Pools tomorrow though.  And went back to my work, thinking that it was all done and dusted.

However, the next morning I did get up and think it would be good to have a Spiritual soak, so re-arranged a few things, popped my togs in a bag and headed off to my normal Pools, about 40 minutes away.

They were closed.  First time in 20 years.

Hmmmmmmm... now I really wanted to go to some Spiritual Pools, but I still believed that I didn't have time to go to Rotorua.  So I Googled the next closest pools.  They were another 40 minutes away, so I grabbed some petrol and headed in that direction.

I got refused entry.

Now I absolutely will not spend one minute speaking about these ugly people, so moving right along...I'm now just over an hour away from my original Spirit, We want you to go to the Spiritual Pools in Rotorua so got back in the car and Hello! 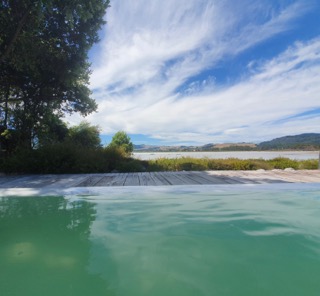 I had an awesomeness time in Rotorua and Spirit proved that yes, I did actually have time.

Anyway, felt amazing when I was finished, drove home, did the rest of my work, went to bed.

Woke up the next morning and went, Uh oh... because I realized that some things which had been going on, shouldn't have been happening.  And by going to the Mother of Spiritual Pools, I saw what I hadn't been able to see. How all the little things were adding up to a bigger issue.

Got up and called my Acupuncturist.  Well, he's mine now.  I've claimed him.

I started telling him what was going on, he interrupted me and said, I'll see you at 2 and promptly hung up.

I can't say I'm keen on Cupping, for me it borders on almost unpleasant. However, it isn't painful.  Literally glass cups are put on your back, and they suck the toxins out of your body. 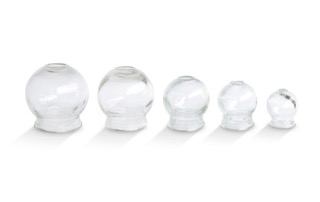 I just didn't like that they literally attached themselves to my body, but to be fair, it could just have been because of the movie I had watched the night before.

Anyway, they leave marks and the deeper the marks, the more toxins they are removing.

This is 3 hours after I had it done. 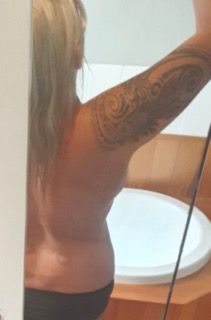 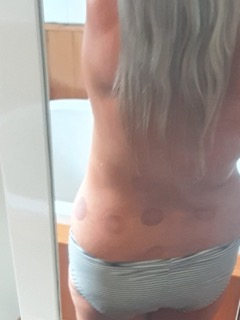 But before the Cupping, I got a Scraping.  Think scraping the toxins out.  It wasn't soft and gentle, but I wasn't hurt.  I assume he used his hands, I couldn't see.

I felt immediately better, and as much as I've had a bit of a whinge about Cupping, all three together - Scraping, Cupping and Acupuncture were fantastic.

Starting, and hopefully continuing, the journey of getting my mojo rocking and rolling back to my Chi.

Wishing you much love and abundance, and a truly courageous heart.