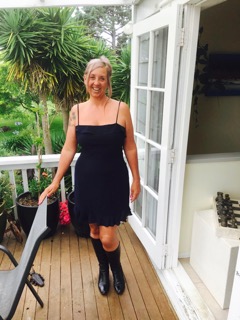 Ok, so just recently, every time I've turned around, someone has been talking about how nasty commercial deodorants are, and how natural is the only way to go.

I mean, seriously, all the time.

Now, I don't know if you remember or not, but I tried the natural way about 7 years ago, and it didn't work.  I literally started to emit a body odour within an hour and that, when you are dealing with people, is just not ok.  So, I went back to supermarket stuff.

However, at that time I was putting a lot of toxins into my body so to be fair, the natural way might have worked, just not in the way that I wanted.

But I've gone so much into the eco friendly, less is more over the last few years, that I thought I would give it another go. And this time round it's worked amazingly.

So let's go into the history of deodorant, and why it's such a big deal to go natural.

Right up until the late 1800's, women didn't use deodorant at all and to be fair, when it first came in, it wasn't very popular.  No one thought it had a use. That changed in the mid 1900's, when a controversial ad hit on women's insecurities about body odour, and insinuated that not wearing deodorant affected your social standing.

And for a few years it worked really well.

However, as more companies invested in the Anti-smell Industry, the more manufacturers played round with the ingredients, and this is where we ran into trouble.

Chemicals started making their way into deodorants, and what had been a fairly natural product became a toxic cocktail of hormone disrupters, carcinogens and pesticides.

But before I go any further into the why's and wherefore's, you and I already know that at least some of this is true.

Because New Zealand women have some of the highest rates of breast cancer in the world.

We also, as a country, have some of the highest obesity rates. New Zealand women are getting larger, men are getting boobs (too much estrogen), our children are getting fat before they hit intermediate, not to mention ADHD, Aspergers, Autism, ODD, Depression, Anxiety and the list goes on.

This we absolutely know.

But back to deodorant and the science type stuff.

Did you know that hormone disrupters, which are known to be in our deodorant, upset our Endocrine System?

What is an Endocrine System?

Good question, 99!  These are glands that are responsible for producing the hormones that regulate:

Carcinogens, of course, cause cancer.

Pesticides cause sensitivities, rashes, headaches and nausea just to name a few.

Did you know though, that despite being registered as a pesticide with the Environmental Protection Agency, Triclosan - which kills bacteria, fungus, and other microbes - is regularly used in deodorants?

Triclosan also poses a risk to both human health and the environment. Animal studies have shown that it alters hormone regulation and increases the prevalence of antibiotic-resistant bacteria. Some research has also discovered links between Triclosan and common ailments such as allergies, weight gain, inflammatory responses and thyroid dysfunction. There are also concerns that it interferes with fetal development among pregnant women.

Whew! that's all the science stuff out of the way, now let's just keep this grass roots simple:

The ingredients which are used to make deodorants, have toxins which are detrimental to your body, and upset the delicate balance which makes your body whole, complete and in balance.

When you stop sweating, the nasties which you are trying to excrete from your body, have no where to go apart from back internally, into your body.

You don't want that.

I don't want that.

* I use Wendyl's Green Goddess Deodorant.  Sometimes Lavender, sometimes unscented.  Remember though, that all essential oils have health benefits and effects, so you must work to your cycle.

If you don't know how to do this, use unscented until you do.