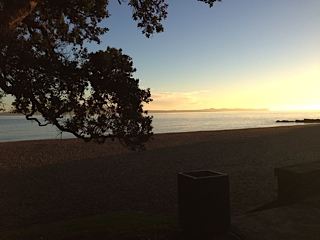 
I love Pohutakawa trees. I think they symbolize the true spirit of New Zealand. Hardy and vibrant and they love the sea. I had heard periodically of Pohutakawa bark and how it was good for inflammation and maybe a little "women's issue" but hadn't personally tried it. Until I went walking on the beach in the early morning one morning, trying to get rid of my little sore shoulder. It was still dark, the tide was out, the smell was that beautiful salty, masculine sea air and as I was throwing it out to the universe "any ideas of this shoulder of mine?" I looked over and saw my Pohutakawa's. Not just one but the whole side of the beach was lined with them. So I went over and started talking to them. I tasted the leaves which I found quite tasteless and the flowers were only the buds not the beautiful firey red which comes out in summer so I asked Spirit if I could break a branch and started to have a little taste. And there was a little sweetness to it. Bingo. So, I there I was at daybreak sucking on a Pohutakawa branch. It was brilliant. I asked Spirit if I could take some more and brought home 3 branches complete with flower buds, branch and leaves. I have dried the leaves because I am not so sure what, or how I could use them yet but when I do they will be sitting on my bench drying out.

** Both Maria and I have done more testing on this and believe that drinking the bark works on the pancreas increasing insulin levels. We believe this because of the weight gain that we both temporarily get when drinking this. At this point I recommend that you only use the bark in a balm or in a tea or tincture under strict herbal supervision.

I explained to Spirit that I wasn't sure how to use Pohutakawa and then said what I wanted it for and them asked them to help me which is how I ended up boiling the broken branches - the tea made a beautiful red concoction. I had most of a mug full and found that it is a definite mood enhancer. Which is nice. Whereas Kumarahou flowers are a really cruizy high, Pohutukawa bark is a very clear energy high, just a gentle mood overall improver rather than anxiety like Kumarahou flowers. I also believe that it could work with blood sugar levels which is interesting but further work will be needed around this. I cannot 100% talk about how it has helped with inflammation but I can say that I am feeling 10 foot tall and bullet proof and my inflammation is not noticeable. In having other women also try this we have found that it definitely is good for balancing out of women's issues. Nice.