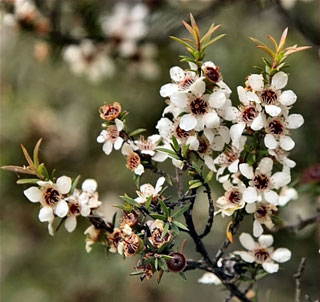 
I love Kanuka. Mostly because it is a truly feminine plant.

If you think about the true balance of masculine and feminine then Manuka and Kanuka are it. They look quite similar and Manuka has some great press which everyone is familiar with but Kanuka seems to be a little behind the eight ball but this is not actually true. Kanuka has some amazing qualities.

Kanuka is my female Viagra.

Originally, I found this out by accident. Actually two separate accidents. First time I used Kanuka was in a balm for the tummy. It sort of worked - it fixed the constipation and water retention. However, it made me feel a little feline and frisky. I thought maybe it was just me so gave it to a girlfriend to try without mentioning the side effects. She had exactly the same ones. Ok then. I put it to the side. The second time I used Kanuka was about 3 years later. In a bath. Again trying to correct another issue - a rash I had developed. I boiled up the Kanuka and put it in the bath. Hey presto, feline and frisky. Again.

Yes, I know, nice work if you can get it.

I also use Kanuka as a facewash to get rid of teenage acne as it works within 24 hours. It's absolutely brilliant.

Differences between Kanuka and Manuka.

Kanuka is always taller than Manuka.
Kanuka is normally softer to touch.
Kanuka flowers are smaller and always in clusters. Manuka are always single flowers.
Manuka has black seeds which look like hot cross buns.
Manuka, more often than Kanuka, often has a sooty mould on it (No, I don't know why it just does)