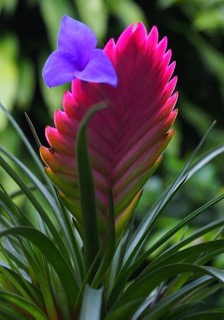 Got a fantastic photo of my babies today, while we were having the storm, inbetween the rain. 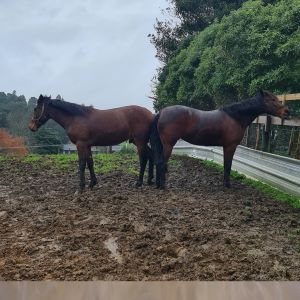 So IF I were to have got hold of some of the Eraquell worming stuff from Australia, which I haven't, because it is illegal, but if I had, I'm pretty sure this is how it would have gone today at worming.

Boo-ba-licious - Yumm... as he tried to have his share while Belles was snaffling not just hers, but his as well.  An extra packet might have had to be put in, just to make sure worming dose corrrect.

Mumma (who hates worming with a passion) - You must think I'm stupid...

Az  and Chew - literally ate out of hand.

I can see how hypothetically it might work, and to be fair, it might make worming super easy.

Well, again, if I had used it, which I haven't, I could have done, Cappy, Boo-ba-licious, Belles, Az and Chew with not one problem, then snaffled Mumma with the teensy pink Promectin PLUS, then done Ralphy Poo and Suz before anyone realized it was worming.

This home-made fermented Ginger Beer was both a success...and not.

Actually, just mostly not, because every single bottle was deliciously alcoholic.

And I don't drink.

I still don't know what happened to stop the eggs, whether it was the weather, they were moulting or whatever.

All I know is that I completely went back to basics: de-wromed, de-liced, de-mited then re-did everything again two weeks later, and here we are another two weeks later and everyone is laying.

We're tryng new stuff again, because I was down at the feed store chattting to the girls, and we were all swapping stories of what new stuff we were using.

What I was using personally, (haven't tried it on horses yet) and what product I've just started using with the horses.  That one is interesting as not known or used here, but excellent results overseas. Anyway, came home from shop with some new stuff.  Interestingly, the stuff that I did bang in the feed in the last few days has had an excellent result though, which is kind of surprising.

I mean, I expect good things to happen all the time, but everyone is really loving this. And surprising, because everyone is looking amazing, considering the weather has been horrible.

I'll be interested to see how this new new product works for the horses though - once I've tried it myself and got the general hang of it.

If what you are feeing to your horses can be taken by humans though, then use your damn head and give them the human grade.

Wait!  You and I are going to have an impromtu lesson about TVP.

Textured Vegetable Protein is produced by thermoplastic extrusion of defatted Soy protein flour with a protein content of 50%.

Definition of Thermoplastic: a large molecule that turns to a liquid when heated and freezes to a very glassy state when cooled sufficiently.

Definition of Extrusion: an industrial processing technique used to to create objects of a fixed cross-sectional profile.

To explain this process further, the defatted thermoplastic proteins are heated to a temperature of 150-200°C, which denatures them into a fibrous, insoluble, porous units. Going into a simple biology lesson here, the term denature means pretty much what it sounds like – to lose one’s nature. It is a term we use in biology when explaining the nature of proteins. Proteins are very temperature sensitive and even a slight change in temperature can denature them, making them lose their structure and function.

To put it into plain English, what this means is that when proteins in our foods are subjected to high temperatures, whether it be through simple cooking or industrial heating, they are prone to losing the original shape and function they had.

Now one final processing step, which normally precedes the above mentioned, is that Soybeans are routinely processed with hexane (a petroleum chemical), in order to convert them into TVP. Various amounts of hexane are regularly found in processed Soy food products. To elaborate further, according to a report from the Cornucopia Institute:

Hexane is a byproduct of gasoline refining. Soybean processors use it as a solvent—a cheap and efficient way of extracting oil from Soybeans, a necessary step to making most conventional Soy oil and protein ingredients. Whole Soybeans are literally bathed in hexane to separate the Soybeans’ oil from protein.

I'm not going to say, I told you so.... re the Government's misinformation around Covid.

It's quite obvious now, considering the Labour Government is being investigated for holding Workshops on how to dodge The Offical Information Act requests and the ASA has just found in favour of the complaints laid against the Government ad that states, Get the jab and protect kids for life.

Because, as it is quite obvious to anyone with an iq over 10, it doesn't.

Y'all think I love being right, and to be fair, in my industry, it is way better than being wrong, but no.

On a completely different note though, I am totally for Sex Education in the classroom.

Well, seriously, why would you not be?

Interestingly, it is in the 95% region for both gay and lesbian peeps AND if done correctly, it takes a woman 4 minutes or less to orgasm.

I'm thinking there should be Sex Education classes for adults, too.

We have the most beautiful colours here, and yes, it absolutely looks like this in real life. 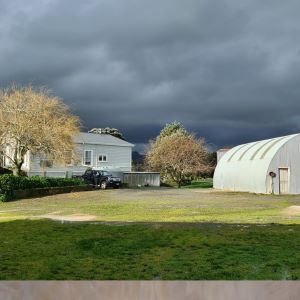 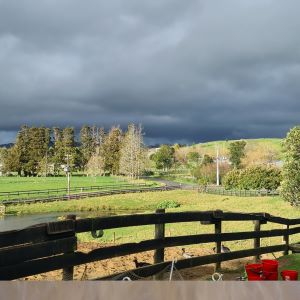 Ok, so today has been deeply unpleasant, but before I go to today, I have to go back to yesterday.

Because that's where the bloody thing started.

So I was standing at my kitchen window, and I got a snapshot of an ambulance coming up my driveway.

Weird, I thought, why am I seeing an ambulance?

But work with me here, this is a snapshot, so I'm physically looking at something about to happen.

This is both crazy weird and super good, because:

b) I'm standing there physically watching it drive in, but there are no sirens, which means that I'm not hurt, and it's not life threatening.

So I went, Ok, something annoying, but not horrific.

And put a mental tick in my, Watch out for anything out of the ordinary, and then got on with my day.

Later on my tradesman called me and said he would be round to look at water tank, guttering and roof, first thing tomorrow.

Righto, be super careful of tradesman falling off roof.

Tradesman turned up and he told me that he had been having a serious run of bad luck, Ok, I thought, and then I was really, really careful of him falling off roof.

He didn't, did his work, had a coffee, then left.

I did a couple of emails, was about to make a phone call, but then decided to grab some lunch first.

King prawns and anchovies, tomato paste and parmesan cheese on a wrap, made like a pizza in the oven.

I've had it heaps of times and it is delicious.  This is important.

Today for reason only Spirit know, within 1 minute of starting to eat I went into Anaphylactic shock.

My mouth, neck, face and tongue started swelling badly, I  started rashing, and at the point where I couldn't swallow properly, I called 111.

I know my body, and was so lucky that I know that you do not panic, you keep calm and keep moving because, and this is important, the quicker you react badly to something, the quicker it can be fixed.

Also, if your throat is swelling, keep your throat moving by taking sips of liquid like water or peppermint tea, which I had just made.  Don't let it just swell.

And guess where I was standing...

In my bloody kitchen, looking out the window.

Ambulance came and the peeps were lovely.  They gave me adrenaline and within 2 minutes everything had almost come right.

They still made me go to Middlemore in the ambulance, as you can take another shock within 6 hours and it will be worse than the first one.  Did chest x-rays, took bloods, monitored my heart for hours and then sent me home with offers of pills (no - thank you) and epi-pen (definite yes!).

If you don't know, an epi-pen allows you to give yourself adrenaline, while you're waiting for the ambulance.

Apparently, you still need an ambulance either way.

I am 100% fine writing this, with the fire going and peeps texting and calling.

And as much as I have found out that what happened was uncommon, it's not as rare as you think.  All 3 of the ambulance peeps knew of someone close to them that this had happened to.

Apparently, you can eat certain foods for decades and then one day, your body goes, Talk to the hand...

And, if you remember, the exact same thing happened when I turned 40 with make-up.

One day I could wear foundation and mascara, eye liner etc, then the next I took a huge reaction of blotchy skin, eyes puffing up and consistently running.

I couldn't put one thing on my face.

It was extreme, intense and sudden.  I guess this is similar, but different.

A big thank you to the ambulance peeps who were super fun (and let me feed my horses before we left!), Middlemore staff who are seriously over-worked and under-paid, and lots of kissy hugs to my friends (and son) who all stepped up offering food, help and did regular contact through this very bizarre day.

I love you xx

And on the weird and bizarre side of Vegan vs Not:

If you're eating anything red or pink, keep an eye on the ingredient list. If it contains E120, otherwise known as carmine or carminic acid, it isn't vegan. The red colouring is made from ground up cochineal scale insects native to South America. However, if your red product instead uses 'red dye 40' it will be vegan, as this is a synthetic red dye made from petroleum.

And wait...just found out late this afternoon, do you remember last week and Head Office re Soy?

Well, I just heard (obviously not from Head Office) that they are auditing every single business trading under their name.

They bloody stepped up!

That's an awesome win for my horses.

It's been good and strong and fun mostly...and a bit bastard-y in others.

Well to be fair, when you click on the NZ Herald at the start of the week, and the front page is:

Clairvoyant cons man out of 2.5 million, you know your week is going to have challenges.