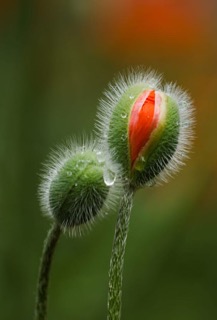 Everything conspired against me getting to Cambridge races tonight.

Seriously, I had planned everything down to the littlest detail, and even had room to move if something went pear shaped.

From the time I opened my eyes nothing went to plan.

By 11am I was actually more behind than before I had woken up.

At 11.20 I cancelled going, after Belle's leg which hadn't swollen more overnight (we think she kicked something or got kicked by Mumma) and was in fact, slightly better, but somehow her personality had turned into Mumma Number 2 over night.

Her and Boo-ba-licious wouldn't come for breakfast, because Belle had decided she was a Diva and well, Diva's do Diva's shite.  The cows were eating the horse feed, pulled one of the buckets off the fence, while still eating feed, Belles and Boo-ba-licious still playing up and I lost my shite. 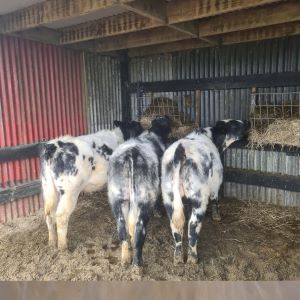 And Mikey, commonly referred to as Number 61 and yes, she is poking her tongue out at you. 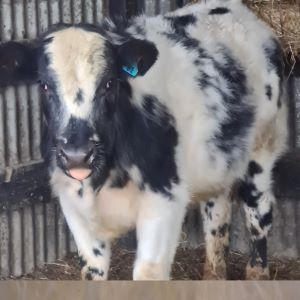 And trust me, right now that feeling is bloody mutual.

It was pissing down with rain while this was all going on, then there was mucho trouble with human peeps having not good lives, not good decisions, not good lives because of not good decisions, more pissing down with rain, more Diva antics by Belle, more I-said-come-when-fucking-called-so-no-you-can't-have-breakfast-now, more rain, more pissed off cows, me with one Mother ass big fucking stick (literal not metaphysical) and then everyone sulked.

A breather while I dealt with human peeps, then a reverse pattern of the morning with cows.

Complete with pissing down rain.

Belles was better, but I'm not putting up with her Diva shite.  Mumma's bad enough, I'm not having two.

Boo-ba-lious was, well, Boo-ba-licious, and thought it was a huge amount of fun.

By the time everything calmed down I was wet, pissed off, wetter again, more pissed off and seriously, how that bloody cow is still living at our home is beyond me.  She was this close (-) to being home kill today.

At one point, I was actually standing on the fence, kind of hanging over it, waving this huge stick and yelling at Cappy's ass (as he is smoozing Mumma into the next paddock over) ...And take the fucking cows with you!

On a positive note: Belle's leg is almost 100% fine, and she is looking and obviously feeling, amazing, and everyone turned up for dinner as soon as I called.

Yes.  That included the cows.

And me (still) with that Mother ass big fucking stick.

There were a couple of really bright notes through the day though, and to be fair, as soon as I cancelled Cambridge everything calmed down almost immediately.

It was still un-fucking-believably-crazy-busy but in a different way, I can't explain it.

Still had a couple of dinner issues with cows (they are either extremely persistent or thick as pig shite), but you know, when Spirit say, You are not going... I really need to listen the first time.

Belle really is looking amazing though.

Everyone was on their best behaviour this morning.

Belle and Boo-ba-licious came when called.  No problemo... 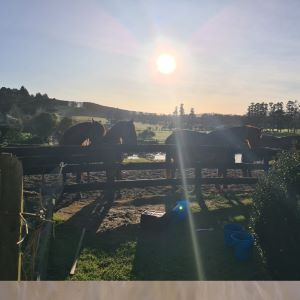 Mumma and Cappy letting me know that we're all good. 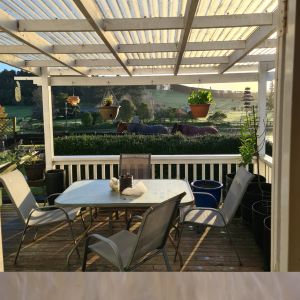 The dirt literally does not stick to Belles.

It defies all reason. 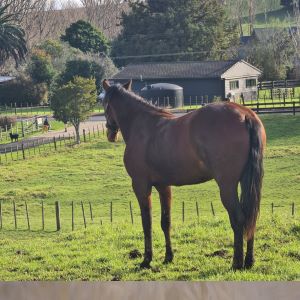 Boo-ba-licious aka The Swamp Monster.

He only looks clean-ish here because it's late in the afternoon and the light is not showing up the mud.

ps: That weird third leg in the middle is actually Belles.  They're always together. 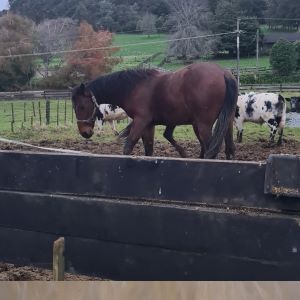 As much as overall I think America has no Soul, there are definitely parts that I love like:

No wait, my 'pologies, my son.

3) All the peeps that have been so super kind to Liam and,

During a recent news conference about a burglary, Johnson, elected in 2016, said a homeowner had fired shots but didn't hit the suspect. Johnson encouraged that homeowner to take a gun safety course offered every other Saturday at the sheriff's office so he could better take matters into his own hands.

"Learn to shoot a lot better," Johnson said. "Save the taxpayers' money."

Or what about on the Atlantic Coast, near Cape Canaveral, Brevard County Sheriff Wayne Ivey makes a game of crime — literally.

His weekly " Wheel of Fugitive " videos feature the sheriff spinning a wheel with photos of 10 of the county's most wanted.

"Everybody watches it. Even the fugitives watch it" to see who becomes "Fugitive of the Week," Ivey said.

Or how about the Twitter account of Pasco County Sheriff Chris Nocco — who has starred in A&E Network's "Live PD" show — with local "Sad Criminal of the Day" posts.

Or Polk County Sheriff Grady Judd, who constantly targets gangs, drug dealers and prostitution rings in his folksy Southern drawl, has been a frequent hit on TV since he was first elected with no party affiliation in 2005.

He also has praised homeowners for firing on intruders, including one last December: "He gave him an early Christmas present. Only Santa Claus gets to come in your house," Judd told a news conference.

And I'm on a pre-biotic tummy lark thing again.

There is so much information about healthy gut/healthy head that I've decided to try fermenting vegetables at home.

Well, I don't like the bought ones very much and I don't believe they do much good.  By the time you have actually bought them and eaten them, I believe a lot of the good (just about all) gut bacteria has gone.

But that's just me, you do you. 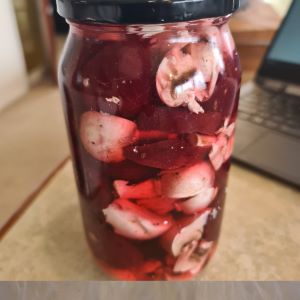 Then I kind of got the hang of it because it is so freaking easy.

I have to wait 5 days to be able to try any, but then I should be raring to go.

I love Korean bbq fermented vegetables, so that's my aim.

Might take me a few go's to do it, but, you know, I should eventually get there. 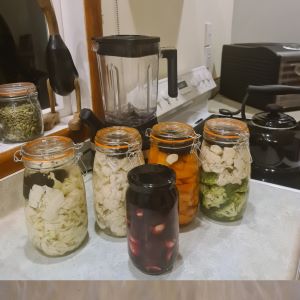 And just so you don't think I've left the dark side,

Banana Chocolate Cake - the photo really doesn't do its deliciousness justice and... 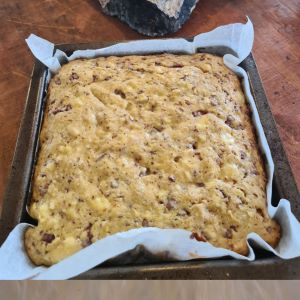 It really is not just as good as it looks, it's so so much better.  Ha! 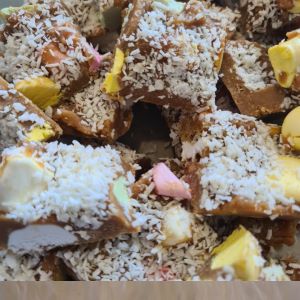 With all the rain, sunshine and new, quite delicious and sweet grass, not to mention me changing the mini's (and Az's) food, all the little ones are down with sugar hooves.

I forgot that last year, I changed their feed, limited their grass, and shut off paddocks.

Yes, I changed their feed, but in the wrong way, and did not limit or shut off.

Off to Feed store first thing in the morning to sort.

Immediately after I limit and shut off.

We didn't end up needing that eye watering supplement.

Something else worked better, quicker and cheaper.

And Lily tried to kill herself last night.

Well, she was a naughty little girl.  She's been trying to step out with Pat the Rooster, and kick Chuck, his Number 1 wife, to the kerb.

So she hid, and got locked out of the chookhouse.

Then we had the worst storm last night.

And I found her lying by my car this morning, comatose, shaking so badly she couldn't move, and she had been attacked.

She was so bad I called my neighbour, and asked her to send down hubby to put her out of her misery.

Then I went, Hang about, she's not dead yet... and called him off.

I'm not that girl that gives up because an animal is not looking so hot.  Nor do I ever want to be.

So I picked her up and bought her inside.

An old feed bin was all I could find to put her in. 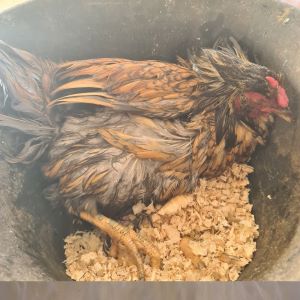 Then I gave her a hot Epsom Salt bath... 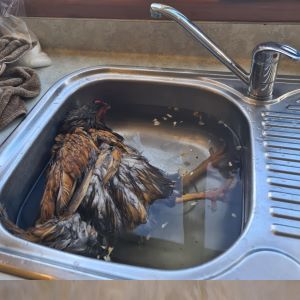 The drained out that water and gave her a hot Kawa Kawa Bath and then another bath. 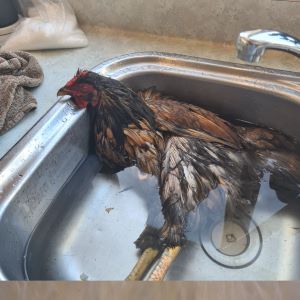 And found out that she also had a dirty bum, and had just started flystrike. 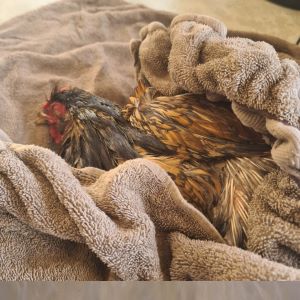 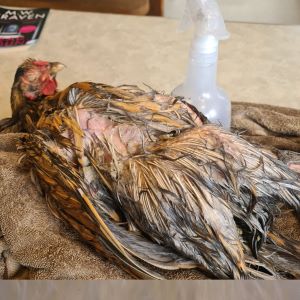 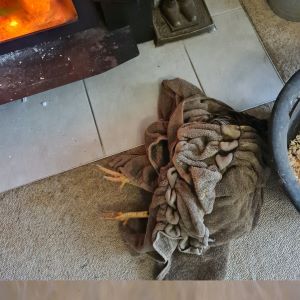 Lily started perking up after that. 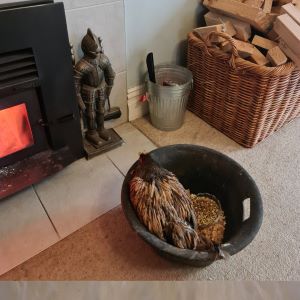 Then wanted to see what I was doing in the kitchen. 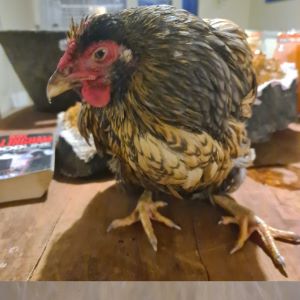 And now all snuggled up in front of fire in her new cage, sleeping and snoring! 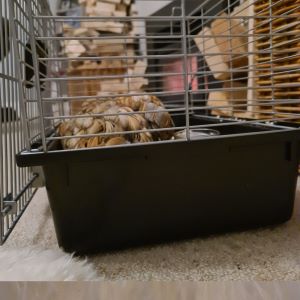 In between, I picked up new cage, saw Vet as I needed Mite killer as thought she had mites, then had to completely clean out the chook house, de-mite that, clean inside because I don't even like the thought of mites...

But as I'm writing this, Lily's done ok.

She's lived to fight another day, and fingers crossed and holding my breath, she'll be ok tomorrow, too.

Well, as I'm writing this she's not dead.

* Not one other chicken had mites though.

But I gave them a Kawa Kawa spray anyway, and will re-do again tomorrow, just to double check.

** I've heard that if you put strong smelling herbs in the chookhouse, that it repeals nasty ass things.

Fuck only knows whether it will work or not, but I put fresh Rosemary sticks in.

After 3 different flatmates (at three separate times), one best mate (x2) and his girlfriend got it.

Result: Unpleasant, but not horrid.

And guess who's living and loving and playing and eating and snoozing by the fire... 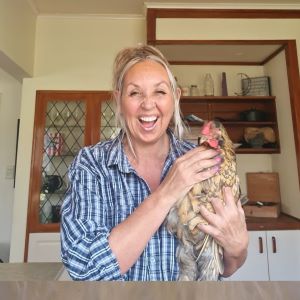 In fact, we were having a little chitchat together, and the lovely lady who owns the store pointed and said, See that box? $300...

A lot of boundaries.  That's super important here.  Not just because certain rules need to be abided by, by us all, but because when one boundary slips, they all tend to head south.

And that's not what I want.

I want, when it's pissing down with rain, dark, the horses are not happy campers and maybe there's blood, or they have got themselves caught somewhere, those boundaries, and this relationship.

When it counts...We need that other-world-ly bond, that overrides every other single thing.

There's also been bucketloads of Spirit this week.

And a little magick.