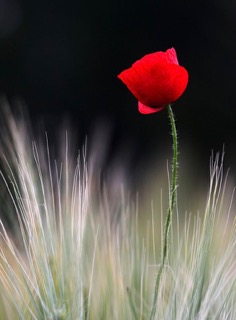 I have to do a proud Mumma moment today!

My son, Liam just got his second Masters while doing his PHD.

Have I mentioned how crazy busy we are here?

Well, as I'm writing this, I have 5 cubes, which will be 10 by the time the tractor (and man) gets here, sitting by the gate at the bottom by the driveway.

Because of all the mud up by the house where everyone feeds.

It's doing my fucking head in because I know I can do better.  And everytime I look out there all I can see is my horses standing on sand and happy as. So I can't rest until what I see is actually what I see.

And I know how well the sand works in the stables.  It's fantastic! So I want to do the same at the feed buckets.  Hence the sand.

I did try to get the sand guy to take the truck into the paddock and up the slight incline, to deliver up to the feed buckets today, but he just laughed. 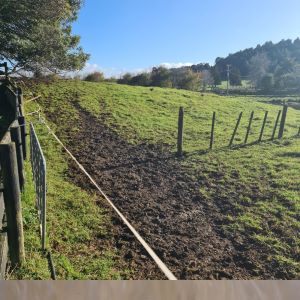 And talking about that, when I ordered sand today we had a little discussion about whether I would be needing labour.  I was a bit miffed actually and was like, Labour? You don't offer labour...

Of which the lovely lady replied, Correct.  We don't.  But remember the last time the boys were round and you had all those bags of sand...

Anyway, moving right along, my neigbour has lent me his tractor and I've borrowed a friend.

In between we have replaced one gate, that stupid one down the bottom, by the driveway and fixed another one.  That was quite urgent as we all know how important it is to have metal gates attached by both hinges, not just one and a prayer. 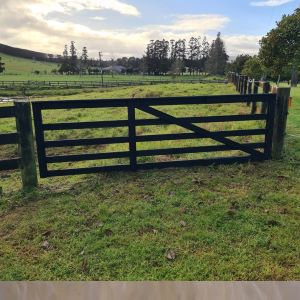 And that stupid fuse box that almost burnt the house down needs to be waterproofed, which will be done in the next couple of days.

I actually have lists and am just ticking things off.  I don't look at what I've accomplished, just tick and move on.

I think it is because the list is so fucking large.

Did you know that you can now get actual majuana from the Doctor?

Smokable, dried cannabis flower – is now verified for prescription use in New Zealand and available to anyone who suffers from pain, anxiety, sleep disorders or anything else a doctor deems treatable with the use of THC.

Mark Hotu set up his Ponsonby practice Green Doctors three years ago. Sick of prescribing addictive painkillers to patients, the GP had been researching medicinal cannabis and liked what he saw. So he opened his clinic in 2018 after the Ministry of Health gave CBD oil the okay.

The whole time, Hotu says he and other green-minded dispensaries – Auckland's Cannabis Care and Cannabis Clinic, along with similar practices in Northland and Canterbury – have been "screaming out" for prescription use of cannabis flower to be verified. 'The government regulations have been so strict," says Hotu. Slowing things down was the 2020 referendum, in which Aotearoa narrowly voted against the legalisation of recreational cannabis 51 per cent - 49 per cent. "It's been three years of hard slog."

Earlier this year, something changed. The Ministry of Health quietly approved doctors like Hotu to begin prescribing cannabis flower to patients who might benefit, were willing to try it and could afford it. The cannabis is imported from Australia by local company Nubu Pharmaceuticals. Like THC oil, the flower offers patients a high, delivering different therapeutic benefits to CBD oil, like pain management and improved sleep. "It's really exciting," says Hotu.

He's been able to prescribe three different strains for just under two months, and three more are becoming available this week. So far, the news has flown largely under the radar. Just one NZ Herald story has been written, about a grandmother who became the first to try legal cannabis flower. Patients aren't swamping Hotu's practice demanding it, because they don't know they can get it. Even the Wikipedia page for Cannabis in New Zealand hasn't been updated.

That's because Aotearoa doctors aren't able to promote its availability. Because of restrictions on verified but unapproved products under the Medicine Act 1981, Hotu can't put photos of the products he's offering on his site, or call them by their retail names. "We're not allowed to advertise," says Hotu. "I can't go on the radio or put a billboard up."

The rules are so strict that Nubu Pharmaceuticals said it was prohibited from discussing its own products. "I would love to talk to The Spinoff about the history-making successes the team at Nubu have achieved over the last few months, but unfortunately due to the rules that govern Section 29 of the Medicines Act, I cannot," founder Mark Dye said via email.

Instead, Hotu is telling patients one at a time as they come into his office. Usually, they're after the drops, because that's all they thought they could get. Now, Hotu patiently informs them that he has a lockable fridge bolted to his floor full of Australian weed with names like Mariposa, Solace and Rocky, all with varying levels of THC. People can pay for their weed and take it home on the spot. When they run out, they can fill prescriptions online and have cannabis couriered to them.

Hotu believes the price would put off anyone from faking an injury or a sleep disorder. He knows the weed he's offering costs far more than it might on the street. Of the three strains he's able to provide, prices range between $289 to $319 for 10 grams.

The difference, though, is that the weed Hotu's prescribing has been through rigorous testing. He can tell you exactly what's in it, what the THC levels are, and what your reaction to it might be. You can't do that with weed bought on the street. Hotu believes the price will come down as competition arrives, and when New Zealand products are verified for use.

Oooooohhhhhhh...almost forgot, Te Reo Teachers have just got a pay increase from $23 to $41 because it is an essential teaching subject. 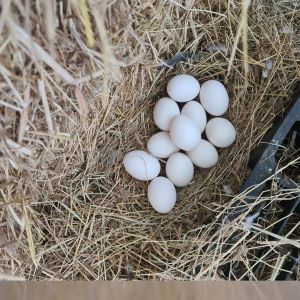 Just in time to make my Most Delicious Chocolate Cake Ever...fingers crossed and holding my breath in a certain way.

And we are all sorted (again, fingers crossed and holding my breath) to put sand up the top by the house.

I'm both super excited and What the fuck am I doing?  I have NO idea what to do apart from "This is how I want it to look..."

And there must be some super bad weather coming because Spirit were like, While you're waiting for tomorrow, put some sand in the left hand side of the stable which is leaky... 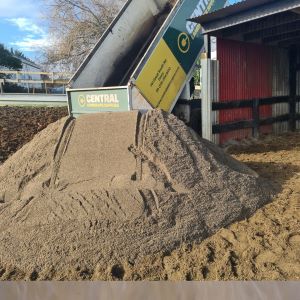 To be fair, I'm not scared of 5 cubes of sand anymore.  It's a walk in the park.

The cows on the other hand...

One is a right manky ol' miss and she was going everyone this morning.

Refused to move out of paddock so I could do it in peace, then was bucking and rearing and throwing herself round the place.  I tell you what, it was not bloody fun for me.

In fact, I called my friend and told him to sell her.

The other two can stay.

She calmed right down after the phone call though.  Apparently, even she knew she had pushed her luck too far today.

Come this afternoon she was all meek and mild and, Who me, Tarns?

I was not a happy camper.

On a funny note though, I'm trying to get sand in stables and I have three (3) cows throwing themselves in the sand, rolling, jumping, playing and well, everyone just loves that bloody sand.

Well, it's funny now, it wasn't bloody funny then.

And we've got people who slow down to a bloody crawl to see what we're up to.

It's kind of funny.

I just don't get people.

This is what we started with: 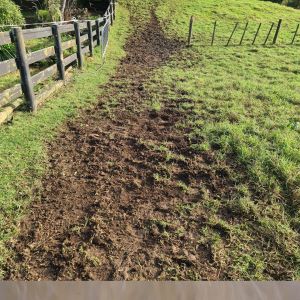 And up the little incline... 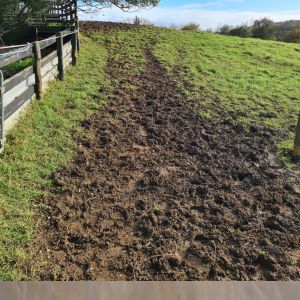 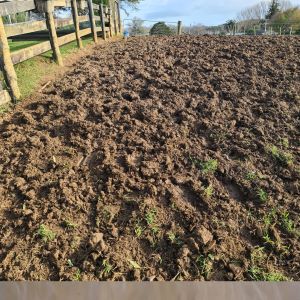 They just get all gluggy.

And then, if you do happen to do the above, DO NOT add sand to the mix.

You will just get this swampy mix of ugly. 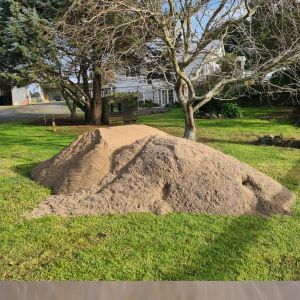 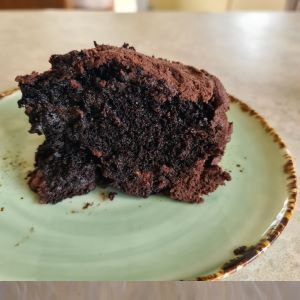 The Most Delicious Chocolate Cake that actually was.

Then back into it...

Si scraped every single bit of dirt/mud/shaving glug until it was down to bare ground again. 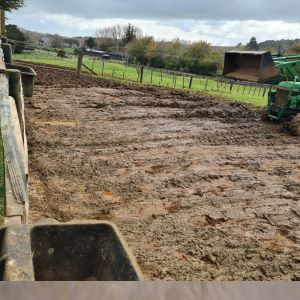 Then tipped it over the fence to go around my Fig (Tree of Life) and Lemon trees.

THEN after (because it was so OMFG heavy) smoothed it all out for me... 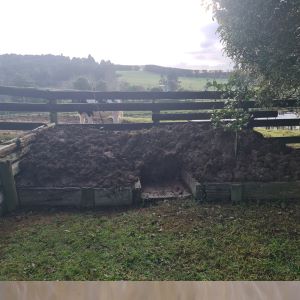 Wait...while I was supervising sand type thingy (and trust me, I was micro-managing because all I had to go on was what I could See, so had to make sure that it was all coming together as I saw it in my head), Az, Ralphy poo and Suz, did a Houdini flick the gate latch, slid under the white tape and just hung out... 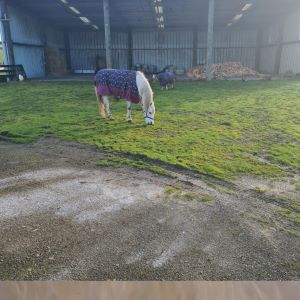 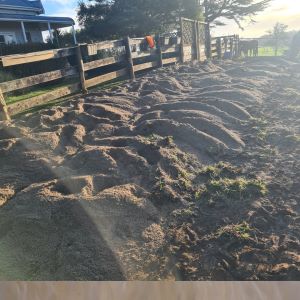 And what we actually finished with... 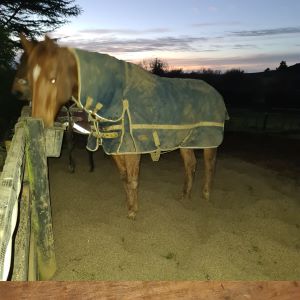 A huge thank you to Tui, Chris and Si.  Without you guys it would still be just a picture in my head.

The young one is working his ass off over there and I'm working mine off here.

There is literally no room to breathe.  As soon as I finish one job, Spirit are, Hurry up, you have to do this...

It's the oddest Energy I've ever worked with and to be honest, I have no idea how it will all pan out.  Most of the time no one does anything like I do, yet to me, what I do makes perfect sense.

So it is literally a wait and see jobby.

I tell you what though, I have taken out every single expectation of everything I do and everybody that I come into contact with, but have thrown myself full tilt into everything, with nothing left over.

And what we've found is the Soul Essence of us and totally Clear Energy.