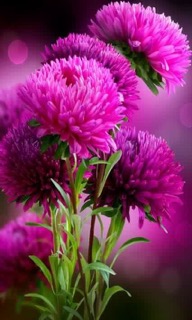 You know there is something quite magickal about cooking up a balm.

You tap into Spirit, Zen out, find your place within the Universe...then make magick.

It's a beautiful part of a day, like being with my Poppa again and the laughs, unconditional love, nurturing and comfort of his being.

It's a truly other worldly experience. 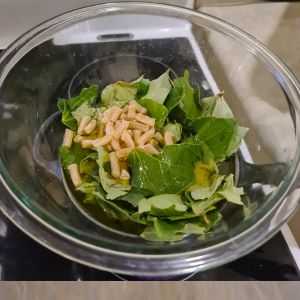 And I love that I am cooking for a particular person.  To fix a thing that they have and that what you are cooking, has it's own recipe of magick which will fix that issue.

That never gets old. 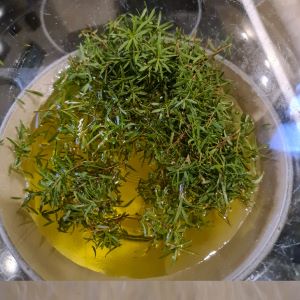 And I love that you make it for just one person.

That it is not a One size fits all.

What I am not loving so much is worming.

Particularly that there are two (2) products overseas which are freaking amazing, which we are not allowed here.

Nobody knows the fuck why.

And this really upsets me, because these products are getting rave reviews overseas.

One is Eraquell Horse Wormer Pellets and the other one is Safe-guard Equi-bits.

Eraquell is super popular overseas in both America and Australia as it is a cereal type thing-y that you just put in the feed.  Apparently the horses love it.

Equi-bits is an alfafa type worming pellet and again, apparently, the horses go nuts for it.

So, again, ask me why we don't have it here in New Zealand?

Just that we are not allowed.

So, even though these products are awesome, some numnuts that doesn't even have horses, gets to tell me what I can and can't use.

What's more wrong is that if some per chance I do get some, that has passed every test available and proved to be safe (and the horses love) I am doing something illegal.

I can't believe we are so backwards here, and so behind every other country.

It's hard to be leaders in our field when this stupid shite is happening.

However, I did find this super cool worming stuff inbetween trying not to get my ass arrested. 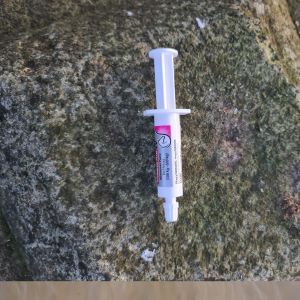 Because it's so tiny, and sticky, you put it in their mouth and squeeze and by the time they are reacting it's all over.

Boo-ba-licious was done twice because I'm pretty sure he managed to spit his out, so I banged him again, and Mumma was the last one and got smart.

Everyone else was fine.  I mean, I can't say Cappy was happy, but you know, he's done.

So I'll do Mumma tomorrow or the next day.  Possibly the day after that.

In the NZ Herald, Saturday 25th June, Wade vs Roe (a 50 year Constitutional Abortion Law) in the USA got overturned.

This means a complete abortion ban in half the states of America.

And it is an across the board ban, there are NO exceptions.

They are also now in talks to decide as to whether contraception is a form of abortion.

I'm heartbroken for the millions of women who have just had their freedom taken away.

I fucking told you that once one freedom is taken away, the next one comes banging on your door.

As of right now though, these 30 companies in America have come forward in covering travel expenses for employees to travel out of state to get abortions:

And in New Zealand:

Shame on you National 's Tamaki MP - Simon O'connor who took to Facebook with, Today is a good day - complete with floating love hearts.

And you should be ashamed of yourself, Chris Luxon.  As the Leader of the National Party and potential future Prime Minister, I expected you to stand up and be vocal with your support of women's rights and freedom of choice.

That you didn't speak, is not surprising though.   Back in 2020 you said, when you voted against our De-criminalisation of Abortion Bill, Abortion is murder.

I do have to applaud Jacinda for (part of) her speech:

People are absolutely entitled to have deeply held convictions on this issue.  But those personal beliefs should never rob another from making their own decisions.

And last but not least, Fuck you, Donald Trump, this was NOT God's decision.

When men have sole responsiblity, 24/7, including sickness, education, food, clothing, socialziation and paying every bill to keep a roof over a childs head, then and only then, do men get a say on what women choose to do with their bodies.

How to keep yourself safe as a woman:

1) Don't use a period tracking app.

You must contact the company BEFORE deleting the app.

2) Remember that you tell the app what day your period starts and stops, allowing it to predict when it will come next, when you'll be most fertile, if your period is late — or if you've missed your period altogether and are most likely pregnant.

Under no circumstances do you want any record of this.

And last, but most certainly not least, DO NOT use your phone in an abortion clinic - for any reason.

You can be tracked.

These have just become dangerous times for women everywhere.  Now is the time to look out for one another and keep each other safe.

Snaffled her first thing this morning, just as she was about to take her first chow down on food.

And because it's so tiny, it was done and dusted before she even realized it.

However, she is a bit on the sulky side.

Oh and I assume I did not get on the Committee.

I just never heard back.

It never fails to amaze me that I say that I am an extremely literal person, and I explain that it means that you need to be very, black and white.

Yet people still bullshite.  You know, I find people very tiring some days.

Your lies and your excuses and your, It's too hard...I didn't realize you meant in the next few days...

I'm loving this Macadamia Chocolate, so had to make a little more... 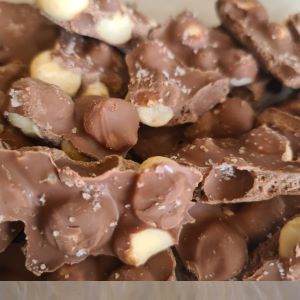 Bloody good, but I'm still looking for my Holy Grail of, Thin, crispy and chewy. 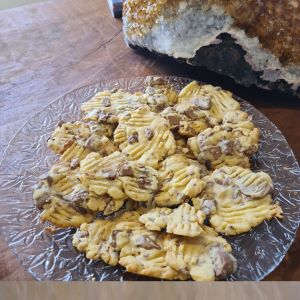 Ok, onto manes and tails.

I'm not a fan of all the stuff on the market.  I find it expensive and a bit Meh! to be honest, so I'm on the hunt for a natural alternative.

Think I found something today, well, it's an awesome de-tangler and I was able to do the little ones mane and tails while they were chowing down tonight.  Well, Belle is always a sweetheart and Boo-ba-licious is quite keen on being touched.

And they don't sulk like Mumma does about worming.

Anyway, the tangles literally fell out within 30 seconds, I was blown away.  I hope, fingers crossed and holding my breath, it makes the mane and tails silky like I've heard, however, the big challenge will be how it reacts when it rains.

Hopefully well, otherwise I might have a bit of a problem.

Anyway, did Belles, Boo-ba-licious and then because I was so impressed, Chew.

And the young one's doing a growth spurt on me.

I was feeding out this morning and when he was finished (everyone else has buggered off) he looked at me and went, I'm hungry...

You can't possibly be hungry.  It's actually a  physical impossibility.

No.  Hungry.  I's growing.  Bones sore.  Naps.  Here he would have put his hoof up and done a little swoon to prove how exhuasting growth spurts are if he could have.

And then I realized he is.

He has been eating more, and grubbing around for only certain parts of the feed.  He's also been asking for me to Touch him and he's always napping in the sun on the sand.

I have just finished today, a project that I have spent almost 8 weeks organising.

Lots of blood and sweat and false starts. It should have been an easy, quick job, but ended up being mammoth.

Mainly because everytime I did something, I found out afterwards that I had the theory right, but practicality wrong.

So I had to keep going back to re-do things.

It was super frustrating.

But it was finally all finished today.

Super happy with the end result, but as I was standing there looking at my work, I thought, Fuck...I hope this works...

It's frustrating dealing with humans.  I don't know whether it is because I'm friendly to everyone, no matter who you are, or because people think I just sit on my ass all day talking shite, but everyone loves my home but seem surprised when I work it. As if my horses just flower during the night and it has nothing to do with my supplements or feeding or Touch/play or any other cool thing that I do.

As if all those other things that I have banged on about for years and years and years too, like herbs, time of day, no jackets to reap the benefits of Vitamin D and to make them strong, how to feed (especially) Mumma's, the Horse/human door and that their Healing ability is phenomenal if you just listen, well, it's like I've suddenly popped out one day and got these amazing horses like magick.

The funny thing is that right from Day 1,  I told you what I was doing with the horses.  I spoke, numerous times about what I was doing, why and how.  I also, if you remember, showed you.

And you said, and I quote, That's shite.

Or you used a slither of what I said, sat back waiting for magick, which quite obviously wasn't going to happen, and then went, That's shite.

So....ummmmmmmm no, I've spoken about this for years.

And how many times have I told you that you needed to stop doing drugs?

That the smell and your Energy that the drugs bring, that we as humans (mostly) can't see, is so damn obvious to the horses.

And they won't work with you.

If you don't believe me, look at your horses results.  There's a direct link.

Actually, that's often why a mare won't conceive to a particular stallion.  She knows that the foal mix is badly wrong.

Anyway, I understand that my home is cool to outsiders though, but that's because I'm a Reader.

And we don't lie or have people that lie in our home.  So the Energy is clear.

So there's a big difference at the moment with people.  The horses and I are loving this Energy, but humans are having a really hard time with it.