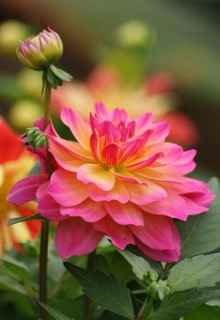 You know, it is not that I am disorganised, it is because of Daylight Savings.

There's not enough sunshine in the day, so therefore I am consistently trying to get everything done in a very short space of time.

And Belle came home today.  Boo-ba-licious was supposed to be swapped but apparently he's going next week.

So it is a real family affair here at the moment. 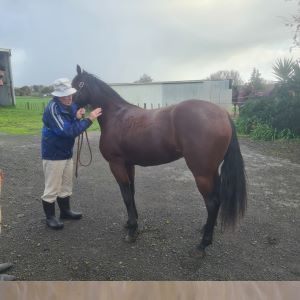 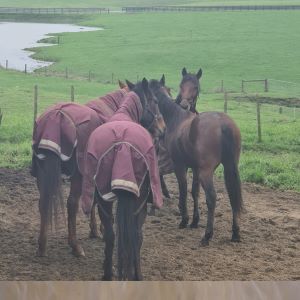 Still no outside heaters and honestly, what peeps were thinking when they did this Lord only knows, and still just one lady at the bar taking bets, however, downstairs takeaway part has completely ramped up their food and it is amazing.

So good, that they had a one hour waiting time.

Upstairs needs a smack around the head with a wet fish.

Or an immediate change of management.

And less than 12 hours from when Belle came home... 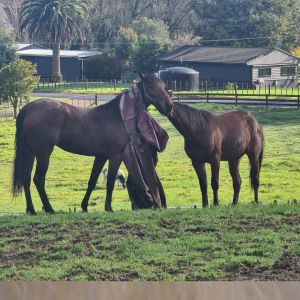 And just on a side note, Belle just stood there like the bloody rockstar she is, Tarns... 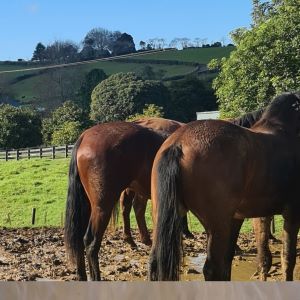 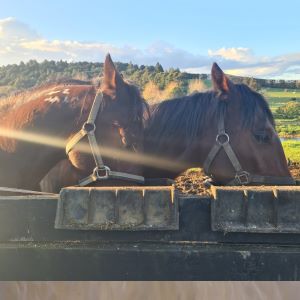 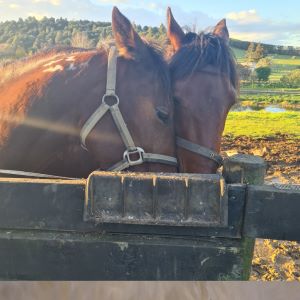 And everyone I know is planting.

Whether you rent, own, lease, have an apartment, lifestyle block, house etc, everyone I know is finding a way to have fresh food and herbs on hand.

I have both in garden and in pots on deck.

I now have, in no particular order:

Lemons, peaches, Black Boy peaches (3 - two in the garden and one on the deck), apples, mini apples, apples with Boo-ba-licious Birth Sack, mandarins, limes, kaffir limes (had to get them once I realized how delicious they were) and plums.

Not to mention: tomatoes, potatoes, silverbeet, brocolli, cauliflower, garlic, carrots (for my babes), beets, bok choy, spinach, raspberries, figs (you know, The Tree of Life) and of course, eggs.

Unfortunately, I've tried growing avocados 4 times now and still no avocado tree, so you know, that's a no.

Anyway, everyone I know is planting.

This has been a hugely frustrating day.

First off, I think I've been sold the complete opposite of what I wanted, and I believe that it absolutely will not give me what I want.

This is a bit disturbing as I absolutely, point blank, knew what I wanted.

And asked for that.

There was no room for miscommunication or I didn't understand what you wanted.

I knew.  I asked politely and communicated well.  There was literally no room for error.

I'm hoping, as I am writing this, that Google and every other bloody website that I have looked at is wrong.

Either way, I'm getting on the phone tomorrow and sorting this.

And one of my plant type thingies I've been using is wrong.  Wrong for the horses, wrong for me.

Well, to be fair, you've been using it wrong too.

You know, saying that doesn't make me feel better like I thought it would.

But honestly, I used it because that's what you had been using and I took it as an industry standard, which once you even have a slight look, is most definitely not what you should be using.

Seriously, some days you guys are just standing there asking to be fucked over.

I wish this bloody Retrograde would fuck off and leave though, it's doing my fucking head in.

And everything got sorted, although not in the way I anticipated.

Works out that I texted a couple of people I knew last night and the texts came back, Yes, you can...yes, you can...no.

So I was more confused this morning.  Rang the Manager and said that I had an issue and after a couple of minutes he said, Look, no problem, we'll refund your money.  Come in and see us and we'll fix you up today.

Went down and saw them.  They really were going to give me my money back, but I was also getting to keep the product.

Because I couldn't give it back.

And they were fine with that because the bad publicity would have ended up causing them more.  I have to say here though you have never in all the years you have known me, ever seen me bad mouth a company.  I just don't do it, I sort it out directly or I take the hit.

Anyway, apparently, Spirit weren't ok with the company both giving me money and product.

Which I can understand, that's a massive hit for any company, so we all started having a chat.  I was like, But the guy seemed to know what he was doing?

And they were like, Yes, he does.  Silence.  And the guy he double checked with also said it would work.

But I've now heard that this just won't work.

In the end Spirit were like, You cannot keep the money AND the product.

The company were really lovely, gave me a couple of extra things to help me and said, Hey look, keep in touch, if it doesn't work, let us know.  But we want pictures if it does.

It was a bloody awesome end result all round.

And on another note: the plant product really was the wrong one.

I thought maybe I had got it wrong, but this one I hadn't.

I ended up at my Feed place and spoke to the Manager who was like, It's just too expensive to use that.

That was kind of disappointing, but unfortunately, he had a point.

Why the fuck would you use inferior and in this case, harmful to horses tummies products, when you want so much from them?

My horses were bloody happy when I got the right stuff though.

And my most delicious, Black Doris Plum and Peach cake... 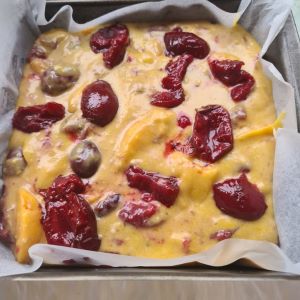 And the finished version... 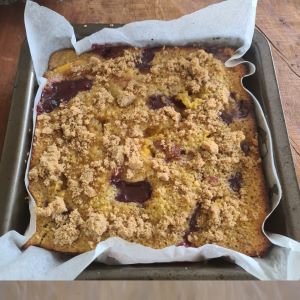 And I have to mention this as everyone now knows someone who has myocarditis.

The change to the ECG, cardiovasclar risk assessment and blood lipids/blood sugar schedule is significant:

* None of those assessements are now required for qualified pilots below age 40.

* After age 40, all three assessments are required only every 5 years.

Note that prior to the change, Cardiovascular Risk and blood lipids/blood sugar assessments were required at age 36 and 40, then every 2 years thereafter until age 70, where the interval changed to annual assessments.

Well, that's one way to make sure that no irregular heart issues show up.

I totally disagree with my feed man, using the right product in the right way is worth way more than an extra couple of dollars added onto a feed bag.

Check out what I just found!

Boo-ba-licious with Mumma, when he was only tiny!! 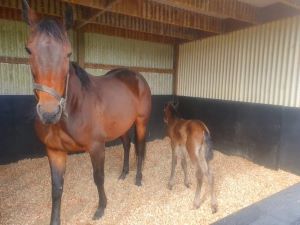 He was always a guzzle guts with food... 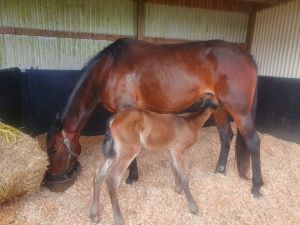 And it wasn't a good week for jackets here...

Went to do feed out this morning and Az is nowhere to be seen.  Weird.

Had a look around the back and there he is standing completely still.

...with his jacket off everywhere apart from completely covering his head.

He stood there while I took it off, then went off for breakfast.

I bloody love my horses.

This horse/human door that I work with, it's not about when it's all sunshiny and fine, but when things like this happen, your horses trust you enough to stand the fuck still so you can sort it.

And yes, I went down immediately after feed out and got him a new, super cool, jacket. 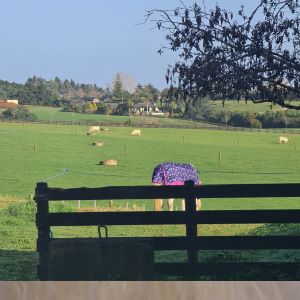 First paddock where Az is, is ours but the beautiful green paddocks further over with cows is not.

Do you know it took me 3 go's to get everyone's feed buckets right at home?

However, now it works out that Boo-ba-licious and Belle eat together, so I put the last bucket close to the third bucket, and a big space between buckets one and two.

Mumma has commandeered both three and four.

But wait...even though there is mud everywhere up by the house, feed buckets one and two are fine and also, third, which is a little bit away from one and two.

So I had put Belle's (before screwed in) fourth bucket, inbetween where there was noticeable space - but no one would stand there.

There must be bad mud there, because everyone is like, Uummmmmmm, I'm not standing there.

Weirdest thing in the Universe. 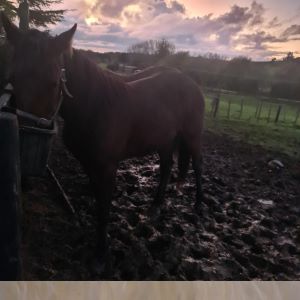 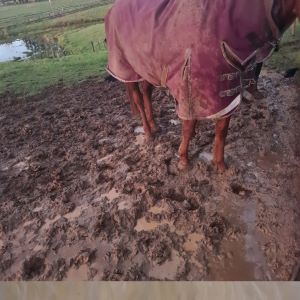 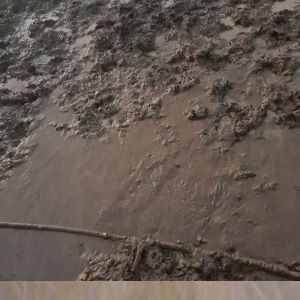 Mud inbetween picture 1 and picture 2 - Bad mud...and no one will stand in it.

Everything stands in a line as it is a fence and as a human, there is no discernable difference.  There is no leak as no water runs from the pipe, it shouldn't look like it does, as it should run off like the other bits, but it doesn't.

And to be fair, when you take the time to really see, it looks different.

And the horses know.

Frustrating in some areas and exceeding expectations in others.