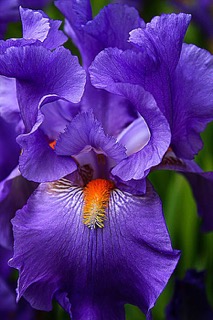 I got to see 4 of the 10 races tonight, we missed the first three due to roadworks and a wrong turn.

But apart from that it was really good, and we had a great time.

Interesting to see that they have changed their menu, changed the betting windows and taken away the outdoor heaters though.

They might need to relook at that, as people were very unhappy (and vocal) with the one woman at the bar who was taking bets, it was bloody freezing outside, and the food was so uninspiring (and surprisingly expensive for what it was) peeps were ordering in Uber Eats.

Anyway, my friend and I had a good time, we were dressed warm (as we know Cambridge), met some super cool new people and are quick learners, so we too will be ordering Uber next time.

Had a few bets and completely lost, however, had picked winners in other races.  But you know, Spirit hate me gambling on the horses because it takes me away from my work with them.

And I can understand why, the temptation can often turn into an addiction.

Now don't get me wrong, everyone I know gambles on something: horses, casino etc.

But I liken gambling to an eating disorder, and as an acquaintance once said, I had the bulimia under control.  I did it at my will every day.  But then one day I got up and it controlled me.

And it got brought home again to me tonight.

I saw a guy I have known for about 5 years.  I say, "Known" very loosely.  Periodically we meet at horse social functions so we both know of each other, but I can't say we're friendly.

But just after I had met him, way back then, I saw him at Alexandra Park and I watched him put a bet on, and he had the lust.

I didn't take much notice at the time, it was a weird moment but you know, working with Energy is weird and mostly, if it has nothing to do with me, not my business.  Which this wasn't.

But periodically I would bump into him again and see the same Energy.   But I saw him again last night and he's a degenerate gambler.

Not physically yet, but he's crossed the line.  Which I was really sorry to see.

Because he was a really well put together guy.  Had his shite together, good looking and on a great career path.

It'll still take time for his life to fully disintegrate, but I hate to see things like this happen, he had it all.

Right back when I was in the early stages of my work, so still in my 20's, I had the loveliest guy client.  He was about 28, really good looking, good job, but he liked his alcohol.  At 20 everyone does, but this was a wee bit different.

Anyway, the last day I heard from him was 10am on a Tuesday.  He was calling me to tell me that he'd just won his court case.  A DUI.  Paperwork hadn't been done right.

I was really happy for him, I mean seriously, who wants a DUI?

And he laughed, and went, Yeah.  I'm at the pub round the corner, I'm having a drink to celebrate.

Put the glass down right now and walk out...

I can promise you that there will have been many, many, many times since then where he will have wished he'd taken that advice.

And on a different but similar note: Cambridge always reminds me of Nana.

The freezing fucking cold, her fagging away and her laughing as she tells me I don't know shite about the horses, drivers and trainers...before she shows me what to look for, who and why.

* RIP to the lovely horse who went to horse heaven tonight.

2 degrees here at night at the moment, crazy cold first thing in the morning, but beautiful during the day. 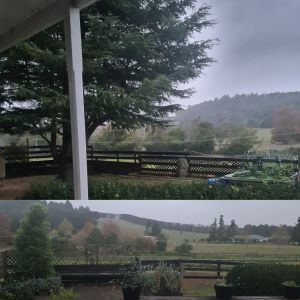 Just so that you know that Boo-ba-licious is fine... 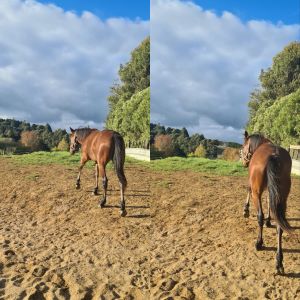 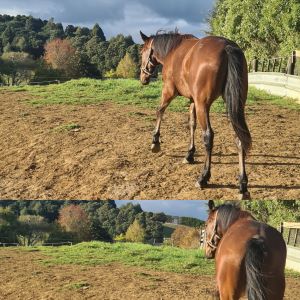 So I think my balage guy hates me.

Well, to be fair, he could have good reason.  I'm The Complainer girl.

Second lot - too wet and stunk to high heaven. And not in a good way.

So I refused to feed it to my horses...and complained.

He came round, explained to me it was fine, horses would love it, told me to feed it to them and left.

Which I did, and they did.

Fed it to the horses who absolutely, point blank refused to eat it.

Came round again with my last lot of balage, then explained to me again that the balage was fine.

That it was superior balage.

Which it might be, but let me just add here that it took everything I had not to say, Well, they must be low class, skanky horses then, 'cause they fucking hate it.

Because they did.  And refused to eat it.

In fact, they spent all of last night kicking it round the stables, then complained to me this morning.

Which is how I ended up complaining to him.

Well to be fair, I've taught my horses how to feed correctly.

How to tell me when something doesn't work for them, so they do, and I appreciate that. 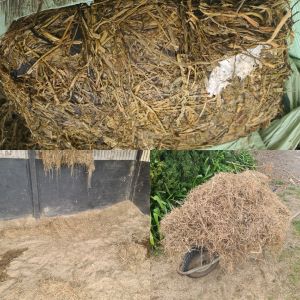 Ok, so had a bit of dairy yesterday, well, quite a bit more and today, OMFG I was so itchy it was driving me mad.

I'm assuming it wasn't just dairy that was in it, and there had to be some other substitutes because I very rarely take a reaction like this.  Actually, now I'm thinking about it, I remember talking about itching a few weeks ago.  Anyway, came back, was gone today when I got up.  However, also used the Kawa Kawa balm last night.

And on a same but different note, I've had to go a bit sideways on the nuts and seeds.

Works out that as I got my body balanced in one area, another area went out and I only really got it when I spoke to a girlfriend of almost 20 years, over a completely different and random thing.

She was like, This can only be happening because of 1 of 3 things:

2) A fast metabolism or

3) A problem with your blood sugars.

I don't do drugs, I most certainly do not have a fast metabolism, so it could only be blood sugars.

Blood sugars can only be thryoid or (literally) blood sugars unable to regulate themselves.  So I've needed a bit of help with some herbs.  Already, within hours, I've noticed a difference.

But again, since I'm not sure what I'm actually fixing, just a vague idea pulled together with a couple of threads, I'm being very careful re the How-to- dosage.

So this is how our breakfast routine goes:

Bananas for Cappy, Mumma and Boo-ba-licious.

Feed Cappy, Mumma and Boo-ba-licious.  I have to do the round circle because then I have to rush round to the open stables to muck out and re-stock balage.

And the little one follows me the whole way round...waiting, checking to see if I have picked up balage, then up, off and round the corner to breakfast, and then back to open stables. 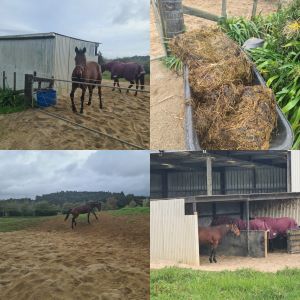 And today was fencing.

My little darling had been eying up the fences, or lack thereof, and today was the day.

And I've got to say, I fed out in the dark, because I ran late and it's raining a little bit so I am praying that the paint stays on the fence and doesn't slide off, but there is a slither, just a slither mind, that is just a teensy bit proud of us here. 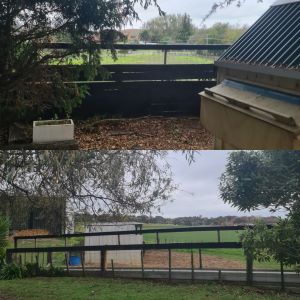 And white tapes re-done, because it works out that how I had done the tape was not so great.

Apparently, angles make all the difference in the world. 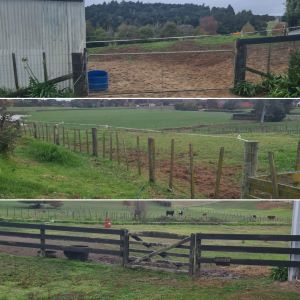 And on another note:  The little one is terrifying the cows.

All of a sudden you see him shoot out of the gate, down the paddock to the cows who are happily munching grass, then he chases them round until he gets bored.

Then he just stops, and walks back to the Welcome Paddock. 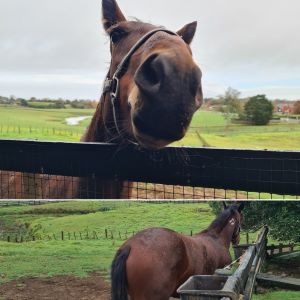 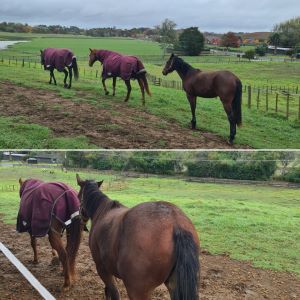 It's challenging because I hate Mercury Retrograde which is what we are in until 13th June.  It's all missed emails, electrical issues, changes of plans, everything takes 10 times longer than it should, there's miscommunication, untruths and out and out lies, and on top of that, if anyone can take offense, they will.

Not to mention power outages, fuses blowing, houses almost burning down (literally, not figuratively), hospital stays Jezus-fucking-Christ-what-the-fuckity-fuck-fuck and all manner of general fucked-up-ed-ness.

But we're strong, and connected, and still standing.

* The smoke-sparking-and-almost-fire was a really lucky one.

It was a when not if scenario.

** Hospital stay got extended to 3 days.

*** My patience is extremely short right now and I'm assuming will be up to, and including, the 13th June.

Don't be a fuckwit.

Or if being a fuckwit is your normal personality...

Then stay the fuck away from me.