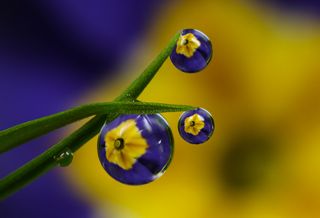 So it's been crazy busy here.

About 10 days ago I heard Mumma's Energy go out.

Well, that's not 100% right.  The change snuck up on me and then Hello! something was wrong.

First off, this is Mumma. 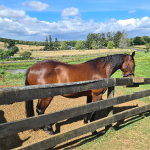 Now, as you can see, physically she looks fine.

And emotionally and mentally she was awesome.

So what was the problem?

Well, it was lots of little things.

1) Mumma coming up at lunchtime for an extra feed - and she's not a greedy horse.

3) Mumma wanting Miri Miri's every time she could snaffle me.

4) When I thought about it, I couldn't remember the last time Mumma was in season.

5) And her tummy was large.  Well, not excessive, just you know, bigger.

Well, anyway, you knew that I had wormed everyone a few weeks ago, so her tummy should have gone down if it was worms.

I hadn't changed the food, but something was definitely off.

So I got a pregnancy test for her.

It came back negative for under 100 days.

Back to do another test.

This one also came back negative.

So, looking at Mumma, and having done a wormer, then pregnancy test, I should have been fine.

But I wasn't, Spirit were nagging the fuck out of me to get this sorted.

So I got a Wellness Check.

Now I don't know how it works in your family, but here, we very rarely need Vets.  And never because my horses are sick.

Because my horses don't get sick.

We do not use Soy, and that's a huge thing, not just because of it's estrogen properties and DNA dysfunction but because Soy makes a horse look good, but they don't have the strength.  All hat and no cattle as the saying goes.

Most of the year my horses don't wear jackets, although Cappy as he gets older is getting more, There's a chill in the air.... and Chew loves his jacket, so as soon as he's not going to get sunstroke he wants his back on ASAP and that's cool.  His DNA remembers a time when he was just left to be cold and wet.

I don't do jackets though because the vitamins and minerals from the Sun are so fucking amazing.  You can't buy that kind of goodness.

And they never get the same feed every day.  Nor when they are babies, do I limit their food.

Like human babies, you feed to them personally.  If they are hungry, I feed them more.  I respect that they are growing and that I am making elite athletes, so I treat them as such.

I also boost to the weather and am always, always in front of the Energy, not trying to fix it afterwards.

And I always use a different herb, or supplement or something which makes it interesting.

And these things make a huge difference to my horses strength, immunity and ability to bounce back from any nasties - whether that might be by-passing a flu going around or quickness of recovery from an operation, hoof or leg issue.

However, we do get Wellness Checks.

No, not because they are sick, but because I hear their Energy change.

And if I know something is wrong but have used herbs, vitamins, minerals, Miri Miri and Touch/play and still something is off, then we do a Wellness Check.  We go back to basics, check every single thing and look with fresh eyes.

And this is what we did.

We could not fault how she looked, or acted.

First, we did a physical (arm up the bum) to check whether Mumma was carrying a foal and hiding it from us.

She did not look wormy, but we also did not know whether overall her condition and supplements would over ride her looking wormy.  Was it possible that the wormer didn't get all the worms?  That some were attached to her tummy?

Possible, so we re-wormed Cappy and Mumma with a different wormer.

We talked about doing a fecal count but decided against it, because honestly it just really frustrated everyone when we did it ages ago.  We would get worm counts over a 1000 one day and 0 the next.  And my horses didn't look wormy then either.

The fecal count just annoyed everybody - the Lab, Scientist, Vet and me.

Then we did feed.

Re-looked, talked about anything I might have stopped (one which I had) and the combination.  We agreed it was pretty damn good.  So the next option was the feed is too full of condition and I'm feeding too much.

We came to the conclusion of: Keep feed exactly the same in doseages, add back in what I'd taken out and do a smaller version of exactly what I do.

It was a really good session today.

The horses were all happy and I really like to see that, I love that our Vet is so pro-active and I don't know how, but my horses know that we're all trying to do our best for them.

They know this, and love us for it, and work hard to help us get it right for them.

Then work hard to do right by me.

We all love Wellness Checks - they're super cool.

I was thinking of something else this afternoon and fed Belle Ralphy poo and Chew's food.

She just stood there looking at me with her big, brown eyes...

Don't you wuv me anymore?

Of course I do, you nong, what's wrong with you, just eat your food.

Changed everything around again, and she was happy as.

She's such a sweetheart.

I knew they were fushia pink and black, but they are actually black with fushia pink.

They're bloody cool and I remember sitting in the kitchen with the young one, Nana and the rest of the crew, laughing and drawing.

That was an awesome memory.

I also want all the fluffy bits.

I've seen one of the trainers who has really stepped up, and his horses look amazing when they hit the track.

And they know it.

I know this sounds really bizarre, but he's not the best driver, trainer or has the best horses, yet his results don't reflect that.  So it has to be something else that this man is doing.

Don't get me wrong, under no circumstances am I even hinting that he drugs the horses, because he doesn't, and he's an honest driver.  I've never once seen him blink.

You know what I'm talking about, that split second of a second when a driver chooses to hold a horse, instead of running to a win.

But he's doing something with those horses come race day because they know they look great and I swear, hand on hoof, his horses love being on the track and they walk around going, Check me out, Tarns!

And they get results.

I've also seen another trainer start fluffing their horses and they're also starting to get some really great results.

Do I just think it is the fluff?

But I do think that the horses know when they are looking as great as they can be and something in their headspace changes.

Oh wait...you want to know what happened with the peacock?

However, I am now the proud owner of 50 ducks.

I'm house sitting two goats for a couple of weeks - a Mumma (Betty) and her daughter, (Boop).

As I'm writing this I can't really see them because the grass is so long.

But they are super cute.

However, they've only been here 4 hours so haven't escaped yet or moved into Mumma's paddocks.

And talking of Mumma, she was scared half to death when they turned up.

She was expecting cows...

So I unwittingly started Fasting (note: cut top and bottom off pineapple, slice in half then each half in 4, is perfect portions - add 3 to each juice and sometimes I switch the fresh ginger to fresh tumeric - both available at your local fruit and vege shop).  It works out that I have 1 juice first thing every morning and then another one at night.   But because of how the juice works, I never eat or drink anything after the night one, so have found that I am Fasting for 10 to 12 hours every day.

And when I was out feeding Belle this morning, I was standing there having a bit of a chitchat and then Boom! I see her standing there in our colours.

I love it when I get Snapshots like this.

I've had them since forever, I cannot remember a time when I haven't had them.

And remember, I got them regularly before we moved in here, when I consistently saw Cappy standing on the hill in front of our house, happy as.

And I knew as much as it was as scary as fuck for me to do this shift, and it was crazy hard in the first 6 months, that we would be ok, better than ok.

But they also work with men.

In fact, Snapshots are not just awesome in the way that they give me a mini glimpse into what our future looks like, but they have saved my bacon on more than one occasion.

Pretty awesome with Spirit.  I like working like this, I mean, don't get me wrong, I love being on top of things, but when Spirit step in, that's also a special kind of cool.

* I never heard back from the Feed Consultant.

The generous part of me says that she is busy.

The OMFG I'm such a cow for even thinking this says that the new feed they're bringing out pretending it doesn't have Soy (because it is not stated on the label), does.