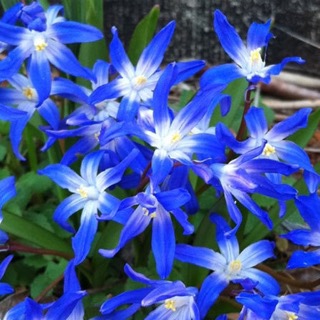 So you know when your kids are young, someone gives them a cookie or piece of cake and they go, Yuck! make vomiting noises and then spit it out?

Well, that's what my horses did today to my lovely neighbour!

I was just leaving to go pick up some feed for everyone, and saw my lovely neighbour was down with her grandbabies and a bucket.  The big horses were all just standing at the gate in the Welcome Paddock, and over by the big shed my little gutz, Az, was chomping away at something delicious.

I got a weird feeling.

Anyway, I went over and said, Hi! and we had a bit of a chat.  And as we were chit chatting away, she holds the bucket up and says, The big horses didn't want any... I looked inside.

It was bloody apples!

So she moved over to Az in the other paddock who had seen a bucket full of something delicious and gone, Over here! Come see your Az and then eaten, hand on hoof, the whole bloody bucket of apples.

I felt so sorry for my neigbour, because she had gone to so much trouble cutting up the apples into the correct sizes.  But instead, ended up leaving with a list of everyone's likes and dislikes.

At least the chickens liked the food she bought.

And Mumma has self weaned Boo.

Apparently, Mumma has decided that she will no longer be producing milk.

Beginning, middle and end of that story.

Oh...you want to know whether the young one had the vax?

Our home works on us all individually and collectively, being strong, powerful and empowered.  Making our own decisions and not just going with a sheeplike/majority rules mentality.  We do our research and then decide what is best for us.

For him it was.

For me it was, and continues to be, not.

But OMFG would you please stop with the, I stood next to someone who had the vaccine and a) had a miscarriage b) totally threw my hormones out c) made my period (either) stop or bleed continously and/or d) made me have a blood clot.

The vaccine will also NOT make you die in two years, get cancer, shoot DNA disruptors into your body and/or read your mind.

If there are aliens out there waiting to come land, come now, no seriously, now.

And the weirdest thing is happening with the chickens.

They have this Don Mafia thing going on.

This roughly translates to: Those they do not like they separate from the tribe, then said chicken goes into bushes and dies.

I'm not a happy camper because they are doing this with Coyote, and I won't have this.  I know Coyote is not the prettiest but you know, the only Rooster in this house is me, and what I say goes.

Boo is just adorable.  We very rarely do video's now, but we regularly do Touch/play.  Today I was passing and he had found a place in the sun, by the gate, so had just laid down, while Mumma and Cappy looked on.

This is one of my favourite positions with him, as he kind of just stretches out and you know, chills.

It was a perfect time for Touch/play today though, as he particularly loves his tummy being rubbed, which I love to do, and I swear, hand on hoof, today he purred.

It looks like Coyote has a bad sprain, if not a break, on one of his back legs.

I'm still a bit suss about Don Pat re how this happened though, but unfortunately, now there are only two options here:

1) It's a sprain and Coyote gets better.

You know about a year ago, possibly longer when I was trying all those different ways to eat banana skins?

Well, I found my first banana chocolate cake recipe with them in last night and made it this morning.  And brownies as a back up, in case it didn't work.

It worked like a bloody dream!!  I tweaked the recipe quite a bit as you don't need to do what they said re the banana skins, however, it was moist, had a fantastic banana flavour and got a 10 out of 10 from everybody.

Love my horses, as they really know their shite when it comes to vitamins, minerals and the best and quickest way to get both.

I wouldn't worry about it though, Fat Boy Slim, you're as safe as fucking houses.

And bloody Coyote is getting better!

Definitely something wrong with her (his?) leg, but she (he) sits in the garage and chats away to me while I make the feeds up.  The rest of the chickies and bloody Don Pat are all better with her (him) too.  Not great, mind, but better.

A small miracle on that one.

I had the three weirdest conversations yesterday.  All with different people, all totally random and out of the blue, but all with the same theme, and they went like this:

1) If our friendship/relationship is based on me being "normal", not saying freaky ass stuff, witchy things or generally being random and weird, then I don't want it.

2) If our friendship/relationship is based on me paying you money, then I also don't want it.

3) If our friendship/relationship is based on me doing all the emotional work ie: texting, calling, emailing and generally well, doing all the work, then I really, really don't want it.

I have worked hard to have a life full of love, in all it's random, quirky, weird ass and generally not the average kind of bear way.

If that's not for you, that's cool.

Every single time I speak with a horse, whether it's a friend that I already know, chatting about what has happened and what's gone wrong, or a completely new one that's never met me before, that feeling I get just blows me away.  That the horses trust me enough to speak, is awe inspiring.

And no matter whether the human listens to me or not in the end, to speak, share, and all of us be on the same page for a split moment in time, well, I wouldn't change it for the world.

We're just cruising here, taking every moment for magick that we can.

Which, to be honest, is just bloody brillant.

Caps, me, Spirit, Az, Ralph, Chew, Suz, and of course, my beautiful Mumma Bear, Belle and Little Boo, Pat, Chuck and Lightning, Humprey, Coyote and One.