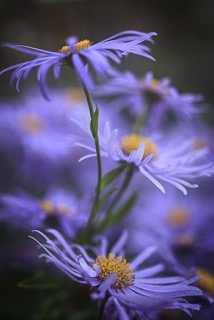 I swear, hand on hoof, I have been wet for 9 straight hours.

Honestly, I stepped outside my door, got 5 metres and it pissed down and never stopped.  However, there were moments when I did get in front of the fire, so there was also a bit of steaming happening.

On a positive note though, Mumma and I are making good in-roads in our relationship together.  We're finding our way and realizing we are on the same team.

Slowly but surely though, we are all making movements forward.

I'm focusing only on what our home will look like when we've got our mojo on.

The little ones are funny though, they got moved to a new paddock yesterday (just behind their normal one) but when they saw me drive up today they were like, Hey, pssst over here...

I'm going to assume they just wanted to help me because I'm human, and not because they think I'm a dumb fuck who can't find her horse.

And on another note, we have a friend who's come to stay.  He has staggers and been told he's not allowed any grass, so he's staying in our arena for a few days.

And talking about that, Caps is softening on his sulking.

Do you remember me saying, about a year ago now, about a new horse who had come over to say Hi! with their person, and I had had a look at it?

This roughly translates to the owner took the saddle off, I walked round the horse, took a step forward and said, This horse is really sore... and the bloody thing went batshite crazy on me.

Not just a little, we're talking bucking and kicking and rearing with a few hopeful bites put in our direction.

Scared the living crap out of me.

Anyway, horse eventually calmed down, and my advice at the time was short and sweet, Sell the horse.

I texted a few times after to see how everyone was getting on, and got some lovely replies back, all along the line of, We're really great.

I didn't see how that was possible, but since there was nothing I could do, I just drew a line under the whole experience and got on with things here.

Until today, when I ended up having a chat to owner.

Things, my friend, are anything but fine.

He goes her in the paddock, other people absolutely refuse to enter said paddock, he can't be put in with other horses, he behaves badly when taken out, not pleasant to float and just recently at a show, reared up and flipped on her.

But it then works out that person who sold the horse, knew his history.  Knew how badly he had been treated by the previous owner and still sold him as:

A lovely horse who is great for someone trying to get their confidence back.

Fucking shame on you.

Some very odd conversations, apart from this one, are happening here though.  One minute I've stopped off to get something, and the next I'm in the middle of a conversation about some truly random shite.

I like these conversations though, they're good for the soul, and I love being able to talk about why I do the things I do, no matter how bizarre the situation.

Caps is finally back on track and loving me again, although it was bloody hard work there for a while.

When he gets his hump on, he really gets it on.

A few things are becoming obvious though, well, to be fair, I've been banging on about them for months, but even so, I'm starting to weave a different tapestry to the one that I originally started with.

That when I left things alone and let them germinate in the way that they wanted to, the picture became clearer, the colours more vibrant and Boom!

So Cappy now has half a tail.

Remember when I was so proud of myself for putting up the springy wire gate type thingy's with high vis flappy thing so that I could separate Caps and Mumma at feeding time, and he didn't eat Mumma's food?

And very proud of myself I was too.

Today being nice and sunny and mud drying up, I decided to use it for the first time.  And it worked brilliantly, so I went inside to do some work.  Lucky for me, I decided to go have a pee and a snack before said work.

And then I was running outside to see what the fuck had happened.  Worked out he had realized it wasn't hot and just walked through it.  He'd gone a decent 3 metres, the bloody fence had stretched that far and had somehow got his tail all wrapped around it.

Not his mane.  His tail.

Then I was sprinting back inside to get the sissors, thank fuck I'd bought a pair last week, sprinted back and over fence and there I was with Caps on one side, Mumma on the other, Az slightly back and to the side, Ralph and Chew just hanging round and me snipping Caps tail as fast as I could, before he realized he was all tangled up and couldn't move.

If I'm on the outside looking in, there's been some good success.  A couple of things have proved themselves true, which is good because it proves my witchy stick is on point, and a couple of things I'm truly sorry I was right about.

But you know, as my old Nana used to say, It all comes out in the wash, Tania.

On a positive note: Thank fuck the shortest day of the year has come and gone, Summer's coming, baby, I've heard the whisper.

We're on the path home now.
Big hugs and horsey kisses from us here, to you there.
Caps, me, Spirit, Az, Ralph, Chew, Suz, the Big E, and of course, my beautiful Mumma Bear, Belle and Little Boo
xxxxxxxxxxxxxxxxxxxxxxxx