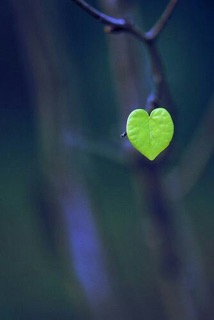 I'm assuming that if I keep doing my thing, then eventually she will understand that she wants what she wants again, and we'll be all good.

I swear, hand on heart, it took a few days for Belle to come right after putting the halter on.

She's a little hell-fire minx when she gets going.  On a positive note, that's excellent for racing.  Not so much, when she has put the Evil Eye on you.

Anyhou, moving right along, she was all back on track today and even a litlle, bent head - come and give me a little cuddle.  Not 100% mind, but a damn good improvement.

And on a funny note: super busy weekend planned and then little by little, it cleared.  Spirit literally wiped my calender.  I'm not sure how I feel about that, because they were all different things with different people, but all of a sudden Spirit were like, Nope, nope, nope, Hell no, nope...

To be fair, Acupuncture and Cupping is full on though and after the last session on Thursday, my body has rebelled quite badly.  My knee's noticeably swollen, I haven't done anything to it, it's just blown up, and I've got a fair few bruises around.  So to be honest, I can understand Spirit just saying, Stop.

Quite obviously, no races tonight.

Wait...almost forgot, every single person who consciously spends time touching their foal or horse refers to their horse to me as, **** is highly intelligent.

I don't just hear it from the odd person.

Those who refer to themselves as, far too busy to muck round brushing, touching and/or (physically with human hands) massaging horses though will often (over 90% of the time) refer to their horse as thick, a bit dumb, not good or doesn't listen.

I know that horses like humans, have degrees of smartness and some are a cookie short of the cookie jar but overall, I'm seeing a pattern.

I've woken up this morning and there is panic, that's P.A.N.I.C with the Coronavirus, with people stampeding the supermarkets because they think it is the end of the world.

After the first confirmed case yesterday.

No, really, they blow my fucking mind.

To be fair though, if you are a Doomsday Prepper, East Africa is also having plagues of locusts:

The outbreak is the worst seen in Ethiopia and Somalia for 25 years and the worst infestation in Kenya for over 70 years. Djibouti and Eritrea have also been affected with swarms reported in South Sudan, Uganda and Tanzania.

Just trying to be helpful.

And Belle baby is just beautiful!

She's doing a growth spurt, so her butt bones and muscles are sore.  This morning she was like, Touch me here... and swung her ass round.  Once we had re-established that doing that is not ok, and re-positioned her, we had a fabulous time.

She's mooching around talking about her bones hurting as they grow out though, and she's right, she's growing like nothing I've seen.  But once I had unlocked the muscles and massaged the bones back into shape, we were perfect.

Also bought a little tiny rope thingy.  That's to get her used to a lead.  It's the size of your hand.  I'll put that on tomorrow.  Then take it off, then put it back on.

The rope is going fantastically though.  She's cool with it.

And on a funny note, often I have people at home and one of the things you always hear me say is, I can't imagine ever waking up again, and not seeing horses... and turn to look at the horses who are normally standing there, chatting too.

Today they all f*cked off.  Nowhere to be seen.  In fact, they were so well hidden that you would have thought I didn't even have horses.

What a fantastic day with Belle today!!

We played with the teensy, tiny lead rope.  It was a loopy one.  Long bit of rope and loop at one end.  Put straight bit where clip normally goes on halter then thread through loop.  Super easy.

Belle was having a bit of a play in the paddock when she first had it on, then had a run round with Mares, then everyone settled down. Belle came back and I took it off.

Gave her a break for 5 minutes then did it again.

It was super great fun.  We did video's which was good, fantastic to see how things are changing and how we're getting more fluid.

On another note, Acupuncture and stones are working.  My knee's better, less swollen although my body is, I swear, holding onto everything at the moment.  It's like, Nope, nope, not letting go...

That's kind of funny.  But whenever that happens, all of a sudden it's Whoosh! Everything let's go and we're through another phase of the Healing, which is cool.

This is just the annoying bit.

Oh, and I can't tell you what is happening with the young one, because I don't know.  I pick him up from the airport tomorrow 5.30am, then he leaves domestic for back to Dunners about 7am.

Enough time for me to buy him breakfast.

He's travelled extensively, and been round people 24/7 since I dropped him at the airport, so I don't expect to get much news from him tomorrow morning.

And anyway, I want him all snoozed up and feeling tenfoot tall and bulletproof when he talks with me.  I want to hear all the gossip, and for him not to leave anything out.

So, that's been our week: Crazy busy.  Lots of Spirit.  There's been some good success, just by getting up and showing up, and trying to be just one smidgen better than I was yesterday.

Yip, getting up and showing up, that's what held out week together.

Wishing you much love my friends and of course, my humans.

* I got 27 minutes with the young one this morning.

That was from the exact minute he walked out from customs and included paying parking at International, walking to car, driving then finding new park at Domestic, and giving him sustenance.  And of course, lots of Mumma hugs.

Anyhou, he came off the plane sparking.

George Mason University is 40 minutes out of Washington DC, in Virginia, and is awesome.

The people are fantastic, really family orientated, and everyone is enthusiastic and really pumped about the future, and what they can create.

And Robiotics is HUGE over there.  The young one showed me dancing robots, and hand waving robots but the coolest thing (for me) is that they have little robots that deliver food to you!

The young one has come back and said it's mind blowing over there what they are creating.  We've got nothing like it here.

It's been a mind altering trip not just for the young one, as to where possibilities lie but for me, seeing exactly how huge and stunning this opportunity really is.

Now we just wait until we have a Nay or Yah. 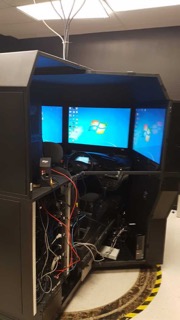 This is their car simulator.  It actually swivels as well.  Super freaking cool!

A couple of their little robots. 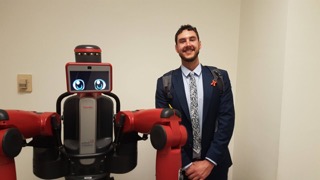 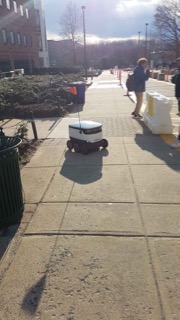 And my favorite one...he (or she) that delivers food.