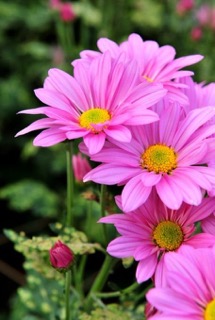 However, if I do this, I can't run my peeps as a herd over my 8 ish acres and I want to do that.  That works for us.

And now we don't have any cows.

I'm going to put this in the too hard basket.

And Chew has a new party trick.

He's decided that if he knocks over the feed bin and only eats a tiny amount then comes up to the house and hangs round, I won't lose my shite.

I've tied the feed bin handles together and laid a big broom across the top AND tied a big plastic container around the broom so now, unless he suddenly has hands, he literally can't get in and untie it.

I've been waiting for this one for ages and it didn't disappoint.  It's soft and gentle and earthy.  It feels like wood but reminds me of cinnamon. Like a crisp winter's day with the leaves crackling underfoot. It tastes of comfort.  A depth of nurturing that is both grounding and whimisical at the same time.  The smell is brown, but not like last week which was earthy and with a kick, like leaves that have fallen into a pond.  This is more like a pair of well oiled, and much loved, hand carved boots.  Comfort by the routined rituals.  The texture was the most delicious thick water.  It's not gelatinous, but has a depth that transcends this time and place. It takes you to the old world.

Mares is going to freaking love this.

I have to give him credit for going into shed, scaring himself half to death with plastic container/broom, and then coming up to the house and hanging round with me, as if nothing out of the ordinary had happened.

Mares loves that herb and I have to say, it's going to be one of my favourites.  It's just so beautiful.

And I stopped into Mitre 10 on my way home tonight.  Once the boys had all stopped laughing, they sold me 2 bungy cords to put over the top of the feed bin.

And races tonight.  I love the horses and they love me back.  Just the right kind of humans too.

My kind of night.

And big love to Norm, one of my racing mates, who died Thursday night. You were always a real sweetheart to me and I enjoyed seeing you.

To be fair, you need to give him credit for being cruisy when he realized he couldn't get into the feed bin.  This isn't finished though, he will just have retreated until he finds his new Plan A.

And on a completely different note, I think I've made a boo boo with one of my herbs.  I caught up with one of my mates today, and as we were chatting away about new herbs the next minute he said, Why do you have **?  It works out that maybe, just maybe, there's been a bit of super clever marketing going on.  I checked at the stables when I went there but no, it's not the same stuff, however, I've not known my friend to be wrong.  I assume somewhere he has to be, but so far when it comes to horses, I haven't found it.

I'm going to keep looking until I get to the bottom of it.  On a funny note though, if it is the same stuff, there's a way better way of using it, than what it's commonly used for.

And when my lovely neighbours asked me if I needed water before they went away, and I waved a hand around airly and said, No thank you, we're fine.  Well, they either need to fly home early or it needs to absolutely pelt down with rain, because we're almost out.

That means no showers, taps, toilets and most importantly, water troughs.

When someone offers me water the answer is always, Yes, please.

And holy Christ, I went to fill the trough up for Caps and Az, then took a phone call, went back outside and I'm like, What's that sound...

At the rate I'm going, I'm going to need to do a naked rain dance under the moon, in the next few days, possibly hours.

Good news though, Mares is doing particularly well and Belle is awesomeness.  She's growing like nobodies business, is the most gorgeous colour (I know she may change) and is all legs.  Super cute.

And Mares is piling through the food.  I do not use pre-mixed bags because as you can see, horses are so much smarter than us.  They know when a food/vitamin/mineral is bad or when they don't need it, so giving a scoop a day doesn't work for us.  We ride the Energy.  Also I've noticed, that horses that only use pre-mix even though they look amazing, get cold's, flu's and viruses.  And they don't recover quickly, if by some per chance they do have an accident.

That doesn't make any sense to me and tells me that even though they look amazing, it is outside amazeballs not inside.  That they look strong but in reality, they have no substance.  The Chi is weak.  Because horses have a phenomenal ability to heal themselves.

But to be fair a lot of people don't use herbs, or if they do, they don't understand the doseages, what they actually do, how they work or what they react, or more importantly, interact with.  So they'll give good herbs but all together which negates them.  Or every day.  Which negates them again.  It is a One size fits all mentality.  And it's hard to listen to a horse, because this concept of talking challenges everything you know, or been raised on, about a horse.

However, I just upped her food again today, by almost double in one respect.  After adding more (and different) food in 5 days ago.  She was hungry again.  By how much, if I'm being honest, I have no idea, I am literally winging her food at the moment.  All I can say is I feed two decent buckets (stable buckets not home buckets, and stable buckets are bigger by about half), twice a day and there was nothing left the last two days.  And Belle is growing so quickly (and also now eating out of the feed buckets) that I can only go by what they don't leave.

And at the moment it's nothing.

It took Chew just under 5 hours but when I went to feed out, Boom! Feed bin on floor, open.

Nobody likes a show-off, Chew.

And Caps is super adorable at the moment.  It's still cold here at night, which is super weird, so Caps has decided he would like his jacket taken off in the morning and then put back on about 4 or 5.

He'll be like, Ummmmmmm, Tania, there's a chill in the air...

So that's been our week:  We're running hard and playing well.  Every minute of my day is spent doing one thing or another that I love.  Challenging my belief systems and/or making me look outside the square.

It's been a good, strong and fine week.

Long may it continue.

Caps, me, Spirit, Az, Ralph, Chew, Suz, Elvis (who still refuses to be photographed), and of course, my beautiful Mares, Belle and little Boo.

* Bin now bungy-ed to wooden work bench (unmoveable) and bungy on both sides near the clips, so now cannot be either pushed over OR opened.

** 11.52 Monday morning Mares, Belle, Little Boo and me were gifted a new paddock.

This is excellent on many levels:

1) Now we actually get to see if this wormer stuff works.

2) Our new paddock is at the back of the stables (down the back, tucked behind) and is way, way closer to the feed room.

And the kitchen where I make herb tea.

3) It's good for Mares and Belle and Little Boo to have a change.

And did I mention Little Boo is confirmed 30 days old?

I've put up some video's on Instagram, but this one was super fantastic, because you can actually see his heart beating.

Oh, and my mate was right re the herb.  Fuck.

And I swear, hand on heart, with one inch covering the bottom of the big water tank (which everything runs off), I got water.

It's been a most unusual day.

I was out feeding tonight, and having a chat to Caps about whether he needed his jacket on tonight, because it was hot.

Yes, please. Shelle said that I had to have my cover on every night.

Yeah, but I'm not sure she meant every night when it's hot like this.

No, you have it wrong.  Shelle said, Every night.  I's a Thoroughbred.  I gets cold.

You can call her if you want, actually, why don't you get her to come down...

Bin standing upright - both bungy's off, clips undone and lid on floor.

How, is beyond me.  It shouldn't even be possible.

Caps, I want a jacket on every night, lasted 24 hours.  Today he was like, What's the matter with you? Are you trying to give me heat stroke?

And Mares bloods came back today.

She had gone from 4.2 to 4.7 which was great, but she had also gone up a little in 2 others, which wasn't what we wanted.

We talked about other herbs to use but I wasn't sure, it didn't feel right and to be fair, the herbs I did use shouldn't have put the other two up. So I was thinking about this driving home after feeding tonight, and then went S.O.B!!  It was one of the new foods I'd added a few weeks ago.  So I turned round, grabbed Mares feed back off her and gave her new stuff.

This is the interesting thing with herbs - you have to make sure that you are dealing with the original sin, not the symptoms.

Anyway, not 100% of a perfect end result, but not too shoddy either.