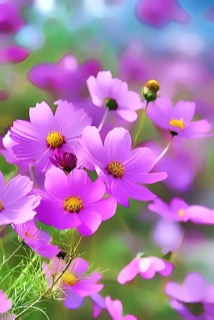 So I used to bet against Mr B at the stables when he was still working there, and it was lots of fun.

However, at the start, I mostly lost.

Because we used to bet on pregnant horses.

He, on the other hand, used to light his cigarette, look at me, smile and say, It's like taking candy from a baby.

I did eventually get better at picking, but I could not touch the horse, feel it or talk to it, because we were either driving past or standing outside the paddock.  But it used to drive me crazy how he knew to the day, yet he would never say how he knew.

But just before he left, he did.

Filberts (Hazelnuts) are definitely suppressing my appetite AND stopping my sugar cravings.

Too many people, not enough horses.

And I have to say that I am actively disliking this Veil between the two worlds and Mercury Retrograde Energy.

First off, it is reminding me of, Tasting the dark side, before drinking the holy water.

Which always annoys the fuck out of me.

Secondly, I can hear the Energy changing and I actively dislike change.  But every time I turn around, I see The Tower. 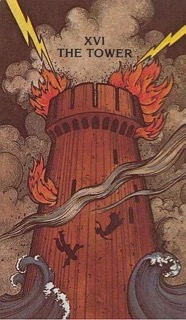 This always means change.  Never as you have planned, and never particularly wanted.  I don't like change. I'm a  Cancerian girl.  I love my home and things exactly the way they are.  However, I know that things are not going to continue for much longer the way they are, and I know this because The Tower is coming with other cards... 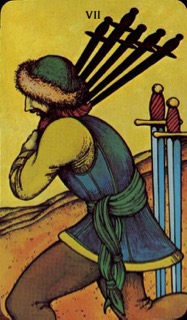 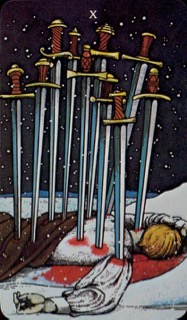 Ten of Swords.  Exactly, exactly what it looks like.  No good ever comes out of this card.

However, next there is Temperance. 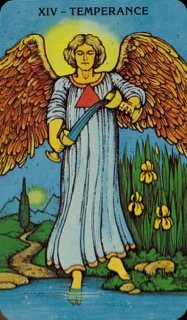 Temperance is lovely.  She talks of Spirit help and guidance, and to wait for nasty ass Energy to pass.  That you are being protected and don't freak out - that everything is as it should be.

And then I consistently get The Star. 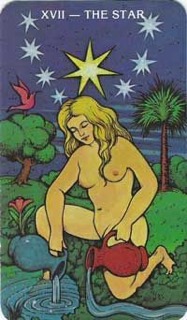 It's all going to work out fine.

I don't know how because no matter which way I look at it, there's stuff going on behind the scenes which I am not aware of, however, a forewarning is almost as good.

And just because I can't leave shite alone, I also pulled out another two - just to be on the safe side. 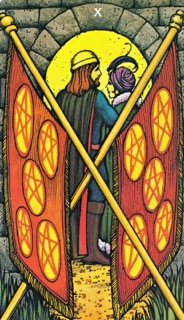 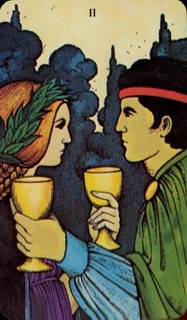 Two of Cups - There is not one problem on a long-term basis.

I'm feeling slightly better about things now but you know, we've still got to wait for the The Tower to hit.

Anyway, back to what I was talking about...

Thirdly, Spirit have already sent me a huge opportunity, but to be fair, they forced me.  I can't even write about it, and if I'm being honest, I can't even breathe properly when I think about it, so you know, I'll write about it when I can breathe again without panicking about, WTF am I doing?

Fourthly, I'm not the only one seeing beyond the veil.  Which is super annoying.  For future reference if you ever hear me use the phrase, Kiss me quick... the other half of that phrase is always, before you fuck me up the ass.

You know, when I use that phrase, my soul literally hurts.  It's an actual, physical pain.

Fifth, I am truly blessed with the gifts that I have been given and truly hope to fulfill those that I promised.  I also promise not to work on fear (mostly), to be the very best person that I can be (I try) and to not make myself small so that other's can feel large.

Without being an arrogant and pain-in-the-butt, muppety asshole.

I also give myself permission to be human.

I need to find Elvis, I need a cuddle.

I took too long writing this blog, and he's now buggered off to sulk until it's bottle time.

Anyway, it wasn't just me, tonight didn't gell for a couple of peeps.

It's ok though, this Energy won't last forever and anyway, how many times have I said, Let things fall apart, so they can fall together in the right way.

Trials were cool.  Belle and Mares are super amazing, conversations have taken on a quite bizarre life of their own and life is pretty good.

However, I am keeping all eyes open and taking nothing at face value.

So that's been our week:  It's a curvy road right now.  There are awesome things being presented.  I'm laying foundations in a couple of others, but those will take months and months to show any really great stuff, and there are a couple of things in the pipeline which have the potential to be fantastic.

As I've also spoken about, there's a couple of uglies lurking.

Wishing you much love as always my friends, and of course, my humans.

* And I got a lovely, random text, at 11.03 Saturday night (different to the other random texts - and pictures  -  I've been getting from guys I've never even met, let alone spoken to) anyway, bloody Chew was out.

Visiting the horse that lives by himself, down the road.

We need to have a chat again, and I need to explain that he either needs to stop visiting the horse down the road, or stop getting caught.

The Sun claims privilege in it, and it is under the celestial Ram.  It is an herb of great use, both for inward and outward diseases, for by the warm and comforting heat thereof, it relieves all cold diseases of the head, stomach, liver and belly.  The decoction in wine removes cold distillations of rheums in the eyes and other cold diseases of the head and brain, as giddiness or swimmings, drowsiness or dulness of the mind and senses.

** Everybody has their jacket off again apart from Suz, who thinks I'm the Anti-christ again.

Caps let me take his off on the condition that I put it straight back on later, just before there was a chill in the air.

And Fenny, Flash and Gino are wandering the house eating all the rogue grass.  That was one of the super smartest ideas I've had recently.

Was planning on doing a big day gardening, but ended up just moving my Kawa Kawa.  Got plants all over the place now, trying to find the very best place for it to grow.  Then the day was so gorgeous I just hung out on the deck with my horses, a great book and have as I'm writing this, or will do tomorrow when it sets, the most stunning tan.

*** And Suz was easy as this morning.

I think it had something to do with her almost getting heatstroke yesterday, because she refused to let me take off her jacket.  Anyway, today she was perfect.  Well, not, Here I am, come take my jacket off but it only took 10 possibly 13 minutes, to get her to stand still enough for me to take her jacket off.  I did put the lead on her, but when I was finished I took it off immediately.

I hope this means we have done a big step forward but you know, being smacked around with a 4 x 2 does play with your head a bit.

On another but same note though, Caps has definitely lost weight.  He's not ribby as such but he's lighter than I would like.  I was talking to my friends about it and they were like, Commerically worm him then promptly gave me the worming stuff.  Now my beautiful Caps is refusing to let me halter him and is pretty much trotting round the paddock with me behind him looking like a dick.

Do not, I repeat, Do not tell me that horses don't understand the phrase, Come here, it's worming time.

But to be honest, I absolutely do not want to use a product that actually states on the label:

Suspected of damaging fertility or the unborn child.  May cause damage to the liver.  Toxic to aquatic life with long lasting efects.  Avoid release to the environment.

Horses producting meat or offal for human consumption (do not get me started on this, because how often have I said to you that I think we're being sold horsemeat?  And I know this because some of the mince physically makes me vomit - I can't keep it down, the taste is wrong) must not be sold for slaughter either during treatment or within 63 days of last treatment.

How am I supposed to give this to another living being, that I love, respect and care about?

And depending on who you ask, you are suppose to commerically worm every 8 to 12 weeks.

I also had a conversation today that Mares was "just ok" and I needed to feed her more.

She has had a foal and there is a young one on the way.

It was a bit random though.

**** And after reading about the side effects of the wormer I decided not to use it, and instead popped down to the Vets today to have a chat.  They were all super helpful and chatty about things, and we talked about running as a herd, cows and horses, manure, natural wormers and Do they actually work?

Unfortunately, the general consensus is overall, No, but there is one that does work.  Anyway, first off we have decided to do a fecal count.  All I can tell you about this right now is that I have to pick up three different bits of Caps fresh poo (think still steaming), put in a container and take immediately to the Vet.

I can tell you more, when I know more.

It's such a super cool vibe, and people are always who they really are there.

Oh, wait, I speak for the horses...so to the two guys, driving two floats home last night, it took Nana and I just over an hour to get home, and you guys over took us and left us for dead.

Have more respect for your horses, boys.